Durgamati Review: Bhumi Pednekar plunges into the role with enthusiasm. But, given that she hadn't ever had to so much unrestrained hamming, the strain begins to show. 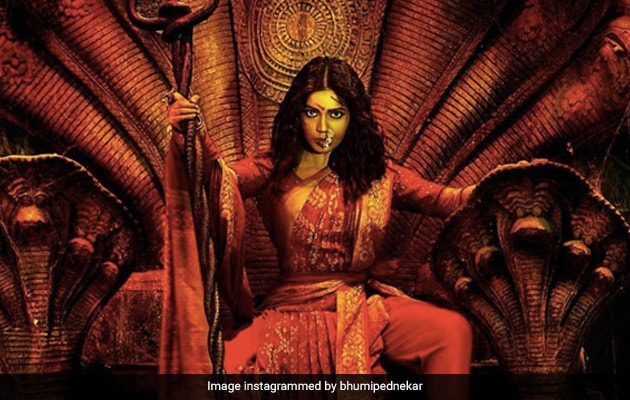 Durgamati Review: A still from the film. (courtesy bhumipednekar )

A ghost story that wends its way into a ghastly rural myth constitutes the crux of Durgamati - The Myth, a remake by writer-director Ashok of his own 2018 Telugu film Bhaagamathi. It begs the question: why? Wasn't it bad enough that the film was made in the first place that it had to be remade?

Durgamati - The Myth, streaming on Amazon Prime, peddles a mix of spooks, scares and scurries that is supposed to instill the fear of God - and, unintentionally, the dread of bad cinema - in us. Not sure it achieves the former. The latter it sure does. It deadens our senses so completely. The 155-minute film is an extended blur from the shallow depths of which emerges unending, unendurable drivel. By the time it has run its course, the ghosts, too, beat a retreat to protect their hard-earned reputation.

The film assembles everything that you expect from a screechy supernatural thriller: a loud background score, an abandoned haveli, fading portraits on the wall, dust-covered mirrors, creaking doors, cobwebbed chandeliers, passages engulfed in darkness, cold gusts of wind, a massive pair of doors with two large human eyes engraved on it and a watchman with no arms. Only the bats are missing! The film itself is batty enough.

What's worse, Durgamati - The Myth has more story than it can handle. Antique idols are being filched from temples. The law enforcement agencies are in a flap as pressure mounts on the top brass. Mission 'nab the culprits' takes the form of a conspiracy to implicate a politician who is so clean that he could be passed off as an incarnation of god. What ensues is plenty of monstrous stuff that is supposed to be entertaining. All that the film manages to be is insufferably exasperating as it blathers on without let.

The politician, water resources minister Ishwar Prasad (Arshad Warsi), and the temple thefts are only one part of the convoluted plot. An IAS officer, Chanchal Chauhan (Bhumi Pednekar), who served as the said politico's personal assistant for ten years, is in jail for the murder of an activist, Shakti (Karan Kapadia).

A tough CBI interrogator, Satakshi Ganguly (Mahie Gill, who occasionally breaks into Bangla, a couple of simple syllables at a time), takes it upon herself to gather dirt on the politician and put him away for life. An earnest police officer, ACP Abhay Singh (Jisshu Sengupta), is deployed to investigate the temple robberies and help the CBI with logistical support. These three individuals orbit around the spirit of a dead woman in a secluded mansion that nobody has inhabited for decades.

One monumental irrationality is heaped upon another. At one point, a tantric makes an appearance and hands out a 'faceless' rosary bead to the officers and instructs them to run for cover if it turns black. If there anything that Durgamati - The Myth will never be accused of, it is under-plotting. The writing is so breathlessly manic that the film quickly turns exceedingly tiresome.

Yahaan kya chal raha mujhe kuch samajh nahi aa raha (I don't have the foggiest idea what is going on here), says one person. Exactly our point. Durgamati - The Myth is a horror story all right. It peddles a bunch of tawdry notions about vengeance and the occult, all served with an overdose of frenzied drama.

The plot makes the lead actress do a great deal of heavy-lifting. She has to holler, hector, sniffle, snarl, wail and flail her arms about to demonstrate that she up for the challenge. Pednekar plunges into the role with all the enthusiasm at her command. But, given that she hadn't ever had to so much unrestrained hamming, the strain begins to show when the film gets to the halfway point.

Durgamati - The Myth actually has a sequence that, had the film been released theatrically, would have heralded the intermission. The heroine, possessed by the spirit of a wrathful queen, shrieks that nobody will be allowed to enter or leave the mansion without her say-so. Fortunately, we aren't 'trapped' in a movie hall. We have the option of bailing out.

If you are wondering how an IAS officer and an evil spirit's paths crossed, the set-up is spectacularly contrived. Chanchal Chauhan IAS, owing to her proximity to the politician who everybody is out to smear, is identified as the man's Achilles' heels. But the CBI interrogator drops the idea of grilling the lady in prison. That, she infers, would be risky because the whole wide world would come to know what is afoot.

An abandoned, haunted mansion is chosen and turned into an interrogation hub although the policemen tasked to get the place ready do not fail to point out that it isn't a good idea. So, before long, the case of the disappearing idols takes the form of a mystery of a marauding ghost that decides to use the young IAS officer as a medium to make her point.

When matters begin to go out of hand, a shrink (Ananth Mahadevan) is brought in to get to work on the possessed lady. He decrees that "this place is no good for schizophrenics" and also, in the process, cites a mental condition known as kakorrhaphiophobia. It is the irrational fear of failure or defeat, the doctor explains.

But that isn't all that the psychiatrist does. To draw Chanchal Chauhan out of the hysterical state that she is in, he spins a story about the gangrape of a college girl in the haunted haveli. The lady contradicts him and paints an alternative scenario to explain why an angel of vengeance has been running amok in the deserted palace.

Believe it or not, an attempt is made to inject some humour into the film. The CBI officer asks the ACP to give her three of his most incompetent inspectors. He takes her seriously and assigns three bumbling constables to keep a watch on the mansion. Their presence and their scaredy-cat antics are meant to provide comic relief. Not funny at all.

If twaddle had a title, it would be Durgamati - The Myth. Say boo and move on. Subject yourself to this veritable endurance test only if you are a sucker for pain.