Dug Dug Review: Inspired by a real temple in Jodhpur devoted to a dead motorcycle rider, director Ritwik Pareek forays into a religious myth created around an alcoholic man who loses his life in a grisly accident. Dug Dug Review: A still from the movie

One of two Indian films to premiere at the ongoing 46th Toronto International Film Festival, Dug Dug, written and directed by debutant Ritwik Pareek, is a strikingly original, wonderfully inventive satire of faith-fuelled frenzy and its fallouts. It is an independent film that the director and his sister Prerna Pareek have produced, but it is small neither in spirit nor in ambition.

Tempering an acutely sceptical tone with an unwaveringly non-judgmental approach to the theme of mass hysteria and its many manifestations in a semi-rural part of Rajasthan, the Hindi-language Dug Dug creates an immersive world in which the thin line between the bizarre and the commonplace is easily erased to deliver a confounding but catchy tale informed with wit and weight.

The Dug Dug visuals (shot by DoP Aditya S. Kumar) capture the sweep of the desert landscape, where a mirage takes next to no time to grow and imprint itself on the minds of people all too willing to give in to beliefs that promise them instant salvation amid the never-ending hardships of their dead-end lives.

Dug Dug rests on a simple premise: faith imprisons as much as it liberates. It all depends on what you make of it. The film does not seek to convince you one way or another - it simply lets the world it inhabits speak its own truth in the way that is best suited to it.

People who seek succour from the perils of a bleak present and an uncertain future are sucked into the centre of a helium-filled balloon - the metaphor receives a literal rendition in the film through the recurrent image of a toy seller who continuously blows air into one of his inflatable wares - that could either explode in their face or help them float on hope.

One may quibble that Dug Dug confines itself within the immediate socio-cultural dimensions of the fervour of faith and shies away from exploring the insidious political repercussions of religion when it is used for the purpose of pushing a community into irrationality and dogma. But assessed purely for its cinematic qualities, it is a commendable achievement that heralds the advent of a young filmmaker with a sensibility entirely his own.

Dug Dug has an original score by the Salvage Audio Collective (who composed the music of Gully Boy) with vocals and lyrics by Ankur Tiwari (the music supervisor of the Zoya Akhtar-directed blockbuster). The musical soundscape is one of the film's greatest delights. It provides a perfect accompaniment for the technical dynamism that Pareek brings to bear upon the narrative.

Inspired by a real temple in Jodhpur devoted to a dead motorcycle rider, the Jaipur-born filmmaker forays into the midst of a religious myth created around an alcoholic man who loses his life in a grisly accident on his way back home late one night from a bar located off a highway. 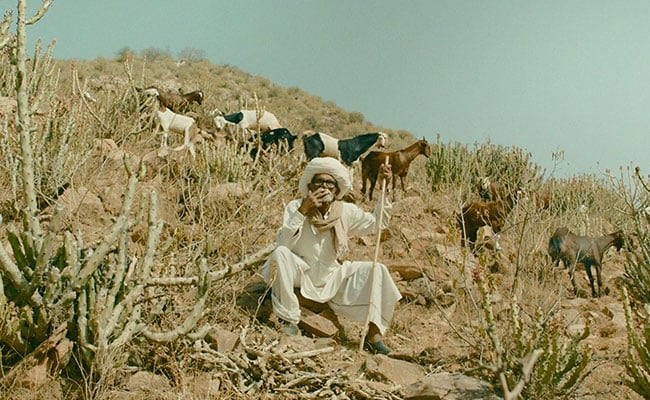 Dug Dug Movie Review: A still from the movie

The victim's motorbike, which appears to acquire a mind of its own and keeps escaping from a police station compound and repeatedly returning to the accident site, turns into an object of devotion and gives birth to a full-fledged cult that takes the shape of a thriving ecosystem driven by personal, social, commercial interests.

In deference to the spirit of the man who owned the two-wheeler and is believed to have merged with it after his tragic death, the local high priest ordains that the most befitting offering that could be made by the faithful to the deified motorbike, is alcohol. He also decides that blue and pink would be the colours of this new place of worship that has come up in the middle of nowhere. How much time does it take the boondocks to turn into a source of boons of all manner? In Dug Dug, very little.

The fame of the road mishap victim who has divinity thrust upon him spreads rapidly and new businesses mushroom in his name in the newfangled pilgrim town. They range from construction companies and automobile showrooms to meat shops and hair cutting salons. Of course, one can also safely presume that the phenomenon is also a windfall for liquor brands.

Dug Dug observes the emergence of a new 'religion' with a sense of incredulity and bafflement that segues into a winking acceptance of a phenomenon as it quickly takes roots and evolves into a veritable 'industry'.

Pareek employs musical montages to portray the depth and spread of the motorbike-inspired religious order and to reflect upon the various ways in which faith plays out in this country of a million mysteries. It is hard to see the influence of the films that Pareek might have grown up on, but Dug Dug definitely crafts a folksy, nautanki-style narrative that fluctuates between low-key drama and unbridled burlesque without ever losing control over its carefully put together structure.

Three local policemen, a politician (Hemant Sharma), a couple of priests, an old goatherd, an itinerant toy seller (Hariram Meena) and the wife (Priyanka Khandekar) of one of the cops (the only woman in the story - her presence impacts the film's final twist) are the people whose actions and reactions are placed within the film's whimsical, free-floating narrative that is elliptical, euphoric and exhilarating in one sweep. 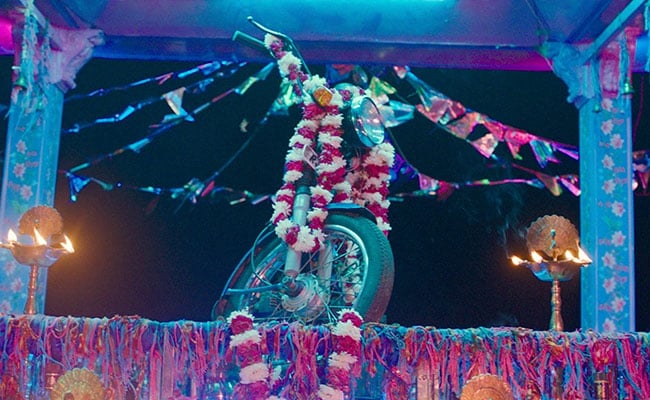 Dug Dug Movie Review: A still from the movie

The film has a cast of literally a hundred because it deals with a multitude of people who fall for the myth of the miraculous motorcycle. However, Pareek's focus is on a handful of characters - they play the parts that contribute layers to a lively commentary on how superstition and blind faith work on Indian minds and how quickly the combination of gullibility and desperation delivers people into the embrace of something that stretches credulity but yields an epochal turning point in the lives of the locals.

Apart from Thakur Lal (Altaf Khan), the drunken man who is run over by a speeding lorry under a hoarding announcing a show by a magician, the three policemen, one as listless as the other, are key elements of the plot. The oldest among them is Manfool (Durga Lal Saini) who, one would imagine, is a seasoned crime-buster. He is anything but.

The two younger cops, Pyare Lal (Gaurav Soni) and Badri (Yogendra Singh), are temperamentally poles apart. One has a healthy disregard for the madness unfolding around him; the other is more than willing to play along.

No matter who you side with - the cynical Pyare Lal or the susceptible Badri - Dug Dug is an immeasurably delightful cinematic work, a film that takes you on a deliberately paced yet robustly heady ride.