Diwali 2020: The 40-year-old actress looked simply stunning in a white salwar-kameez, which she paired with a red dupatta 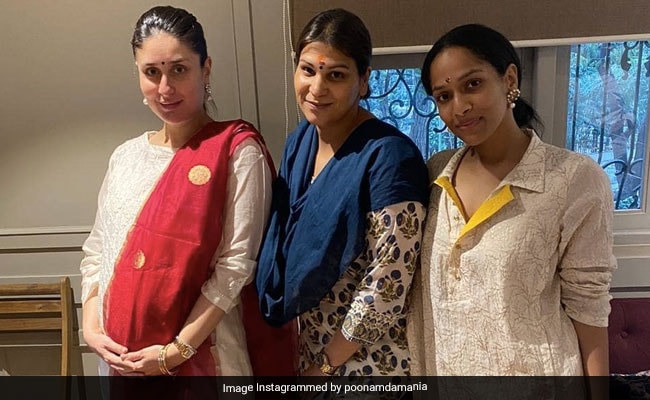 Diwali festivities have already begun for mom-to-be Kareena Kapoor. The actress had a mini celebration with her manager Poonam Damania on Tuesday and pictures from their get-together have been trending on social media incessantly. Kareena Kapoor was accompanied by mom Babita and her friend, fashion designer Masaba Gupta. The 40-year-old actress looked simply stunning in a white salwar-kameez, which she paired with a red dupatta. Her baby bump stole the show. Babita Kapoor can be seen sporting an olive t-shirt in the pictures while Masaba Gupta picked a pale yellow kurti set for the occasion. The get-together was held at Poonam Damania's residence. Sharing pictures on social media, Poonam wrote: "No better way to enter the festive season than with my favourites #babitakapoor Kareena Kapoor and Masaba Gupta."

Poonam Damania shares a close bond with Kareena Kapoor. Along with handling the actress' work, she is also spotted frequently chilling with Kareena and her girl gang, including Malaika Arora and her sister Amrita.

Check out the trending photos here:

Grateful for each day No better way to enter the festive season than with my favourites #babitakapoor @kareenakapoorkhan @masabagupta @makeupbypompy.....thank you all for your constant love and support missed you both @runalib @rutuja5147 #blessed #happydiwali

On Tuesday evening, Kareena Kapoor posted a no-filter selfie to show how much she loves wearing bindis. "There's something about wearing a bindi... just love it," she wrote in the caption of her post. Take a look:

There's something about wearing a bindi... just love it

Kareena Kapoor is expecting her second child with husband, actor Saif Ali Khan. The couple got married in 2012 and welcomed their son Taimur in December 2016.