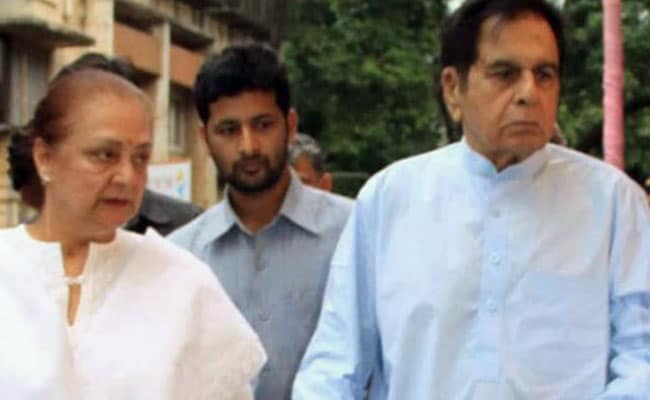 Veteran actor Dilip Kumar, who was admitted to Mumbai's Lilavati hospital after being diagnosed with mild pneumonia, is currently improving, the actor's wife Saira Banu updated fans. Saira Banu said that Dilip Kumar's health is "much better" and added that the 95-year-old actor will be discharged from the hospital soon. Soon after a telephonic conversation with Saira Bano, Home Minister Rajnath Singh tweeted about it and also prayed for the actor's fast recovery. On behalf of Saira Banu, Dilip Kumar's health update was tweeted from the actor's official Twitter handle. "Message from Saira !Banu: Thank you Rajnath Singh ji. Sahab's health is much better," the tweet read.

Dilip Kumar was admitted to the hospital on Wednesday after he complained of breathlessness. Manager of Dilip Kumar's official Twitter account, Faisal Farooqui, shared the news on Twitter. Udaya Tara Nayar, who is the compiler of the 95-year-old actor's autobiography, told IANS: "He is in ICU and his condition is improving. Antibiotics are being given intravenously."

Faisal Farooqi in another tweet also mentioned that this is not the first time the actor has been admitted tothe hospital. In 2017, Dilip Kumar was rushed to the hospital adfter being diagnosed with mild pneumonia. However, the actor recovered and returned home in time for his 95th birthday.

Dilip Kumar is best known for his roles in films like Madhumati, Devdas, Mughal-e-Azam,/I>, Andaz and Ram Aur Shyam. He married actress Saira Banu in 1966. Dilip Kumar was honoured with the Padma Vibhushan in 2015, the Padma Bhushan in 1991 and the Dadasaheb Phalke Award in 1994.