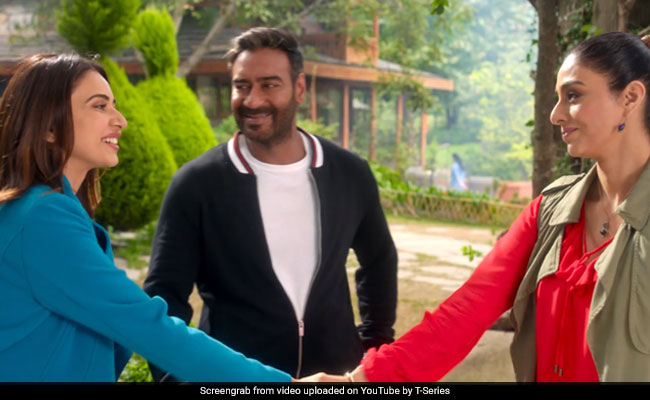 The trailer of De De Pyaar De hit the Internet on Ajay Devgn's 50th birthday and we must say that it makes for a perfect birthday treat. The makers of the film described De De Pyaar De as a "rom-com for all ages" and the film's trailer literally justifies that stance. The three-minute-long trailer showcases the twisted love story of 50-year-old Ashish, played by Ajay Devgn and 26-year-old Ayesha (Rakul Preet Singh). They find themselves attracted to each other but must get Ashish's family's approval first, which also includes his children and his ex-wife (Tabu). Rakul Preet Singh and Tabu can't stand the sight of each other and chance upon every opportunity to intimidate each other as Ajay Devgn tries hard to please everyone.

The trailer of De De Pyaar De has catchy dialogues, epic one-liners and is replete with humour. Rakul Preet and Tabu's bickering sessions are amusing and Ajay's straight-face humour is cherry on the cake.

Check out the trailer of De De Pyaar De here:

Ajay Devgn announced the realease of the film's trailer by sharing a special video on his Instagram profile. Take a look at the post:

De De Pyaar De will release on May 17.