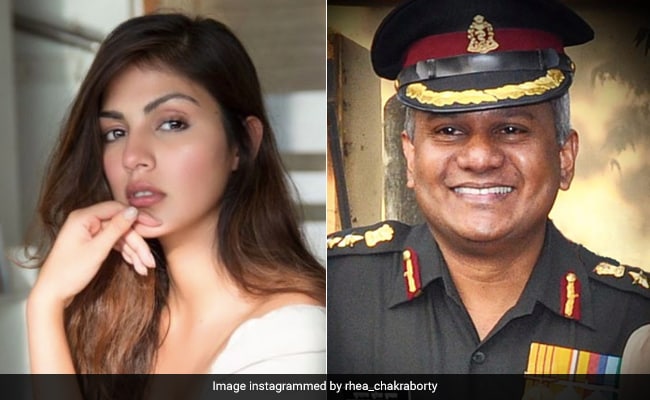 The coronavirus pandemic has been rising at an unprecedented rate across the country, claiming lives and destroying families. As the country continues to witness a record number of cases and fatalities, several public figures have been sharing their experience with the dreaded virus. While actors such as Alia Bhatt, Ranbir Kapoor, Katrina Kaif and Aamir Khan among others, have battled the virus in the past, many have also lost their dear ones to the infection. Actress Rhea Chakraborty is one among them. The actress lost her uncle to COVID-19 earlier this month. On Friday, the Jalebi star shared the unfortunate news with her social media followers, warning them to exercise caution and stay safe in these testing times.

Sharing a photo of her uncle, Colonel Suresh Kumar, she wrote, "Col S Suresh Kumar VSM (Retd) 10.11.1968- 1.5.2021. A renowned orthopedic surgeon, a decorated officer, a loving father and a wonderful human being. Covid took you away, but your legacy continues...Suresh Uncle, you're a real life Hero! I salute you sir. R.I.P."

Rhea further added, "I urge you all to please be home and stay safe. Covid doesn't see good or bad #letsuniteagainstcovid #stayhomestaysafe."

Several other users, too, were seen consoling Rhea and asked her to stay strong.

Rhea has been leaning on spirituality to get through these tough times. She had recently posted an image of the 'Hanuman Chalisa' and wrote, " Give us the power to fight this storm, Give us the strength to withstand this misery. Give us your blessings to heal. Jai Bajrangbali."

In another photo, she was also seen reading Rabindranath Tagore's 'Gitanjali'. Quoting the poet, she wrote, "The question and the cry "oh, where ?" melt into tears of a thousand streams and deluge the world with the flood of the assurance, "I AM!"- Rabindranath Tagore, Gitanjali #keepingthefaith."

The actress has had a tumultuous 2020 following the death of her boyfriend, actor Sushant Singh Rajput. Sushant was found dead in his Mumbai apartment on June 14 last year. Following this, Rhea was arrested on September 8 by the Narcotics Control Bureau (NCB) on charges of organising drugs for Sushant. In March, this year, the NCB named 33 people, including Rhea and her brother Showik, in a charge sheet and accused her of being part of a "drug syndicate".

In terms of work, Rhea will be seen next in Chehre that stars Emraan Hashmi and Amitabh Bachchan in lead roles.