"So excited for you both, my friends! This was always going to happen! So happy!" wrote Priyanka Chopra 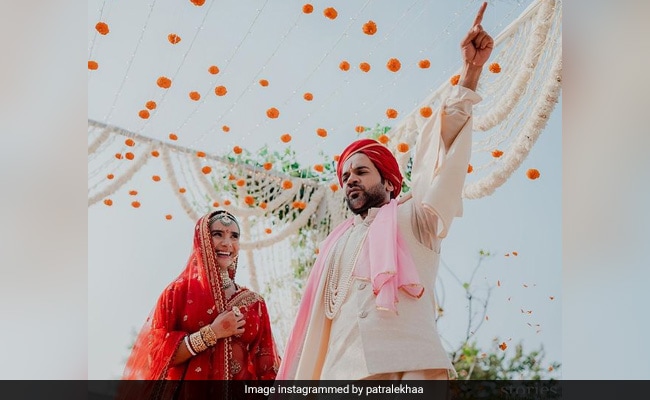 The couple got married on Monday. (Image courtesy: patralekhaa)

Rajkummar Rao and Patralekhaa are married now and their wedding announcement has sent the Internet into a meltdown. In no time, congratulatory messages started pouring in for the couple from the likes of Rajkummar Rao and Patralekhaa's co-stars and friends such as Priyanka Chopra, Katrina Kaif, Sonam Kapoor, Alia Bhatt, Kriti Sanon, Preity Zinta, Dia Mirza, Nushrratt Bharuccha, Taapsee Pannu, Huma Qureshi, Anil Kapoor, Shruti Haasan, among many others. Priyanka Chopra, who co-starred with Rajkummar Rao in the Oscar-nominated The White Tiger, shared a picture from his wedding on her Instagram story and wrote: "So excited for you both, my friends! This was always going to happen! So happy!" 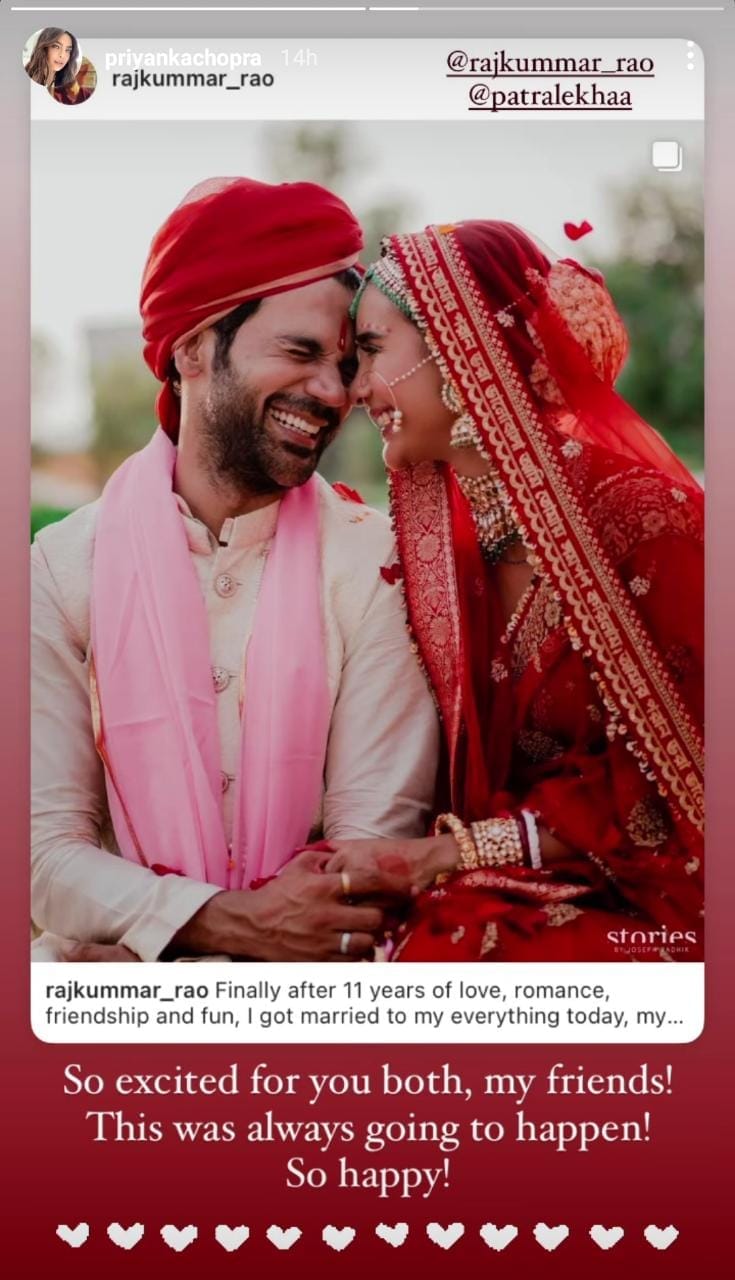 Here's what Alia Bhatt shared for Rajkummar and Patralekhaa: 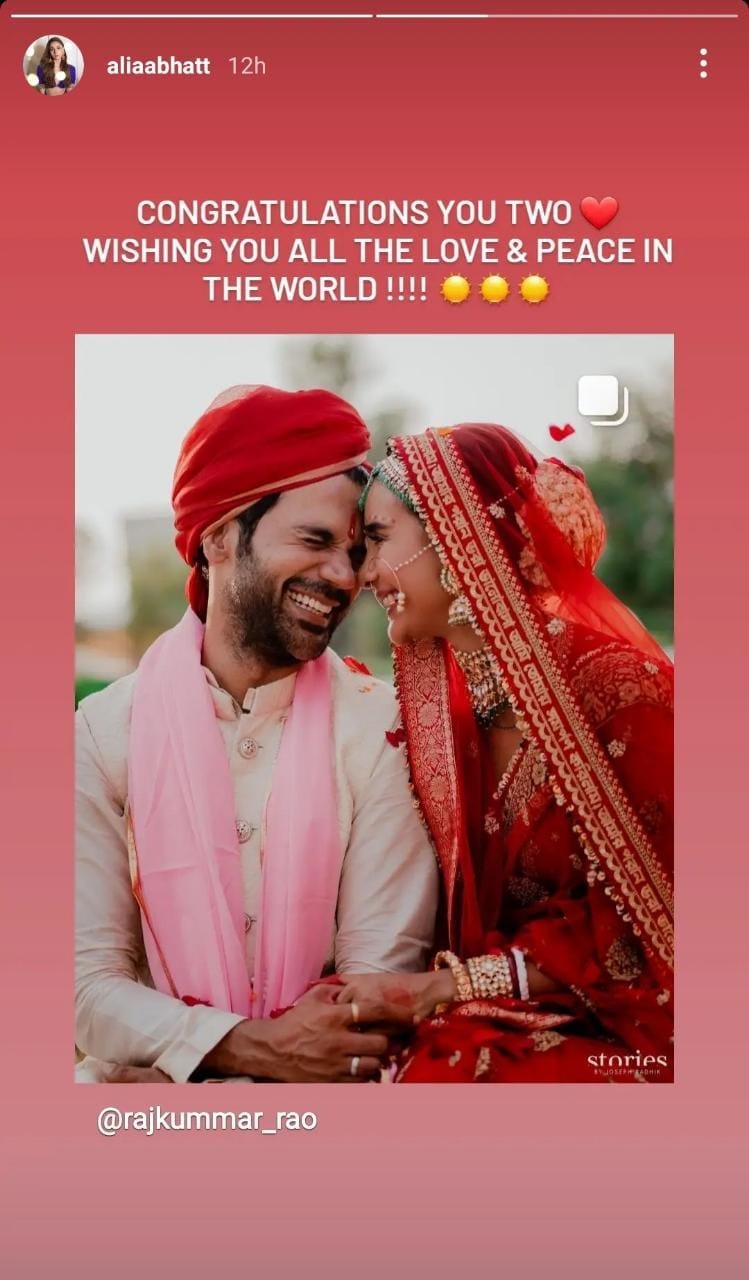 Priyanka also dropped a comment on Rajkummar Rao's wedding announcement post that read: "I am not crying, you are crying! Congratulations....wohoo!" Along with Priyanka Chopra, several other stars also wished the couple in the comments section of their wedding posts. Katrina Kaif commented: "Congartulations to both of you" with red heart icons while Rajkummar's Ek Ladki Ko Dekha Toh Aisa Laga co-stars Sonam Kapoor and her father Anil Kapoor wrote "love you guys" and "congratulations my friends. Wish I could be there in Chandigarh to celebrate...se you all soon as Mr and Mrs Rajkummar Patralekhaa when back in Mumbai," respectively.

"Aww! Congratulations and welcome to the married side. Loads of love, happiness and togetherness to both of you," commented Preity Zinta while Nushrratt, who worked alongside Rajkummar in Chhalaang, wrote: "Congratulations, you two!"

Taapsee Pannu's wish for the couple read: "You both make 'me at for each other' feel actually real! Congratulations." Huma Qureshi, who attended the couple's wedding, commented: "The most beautiful couple and the most beautiful wedding ever!" 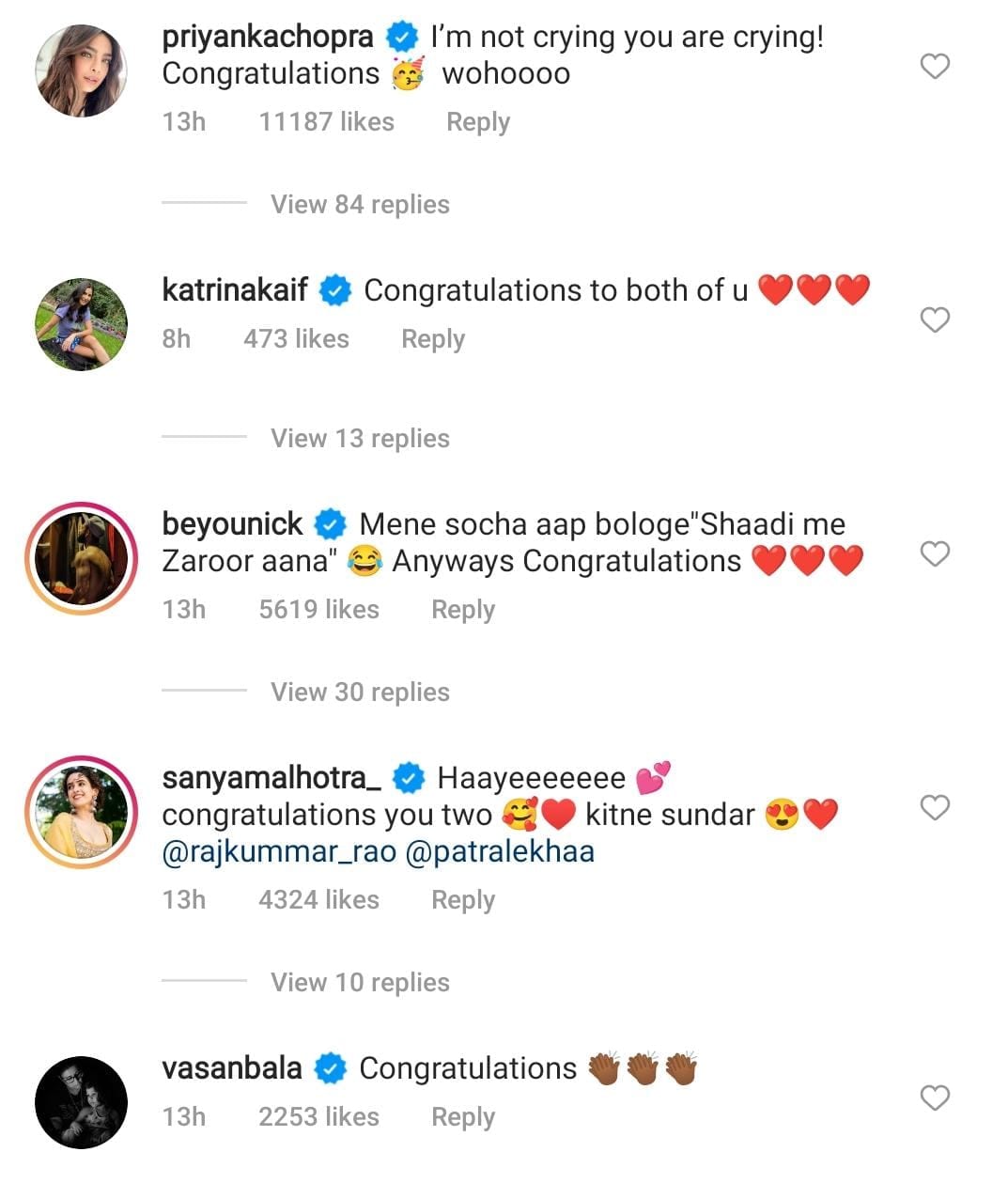 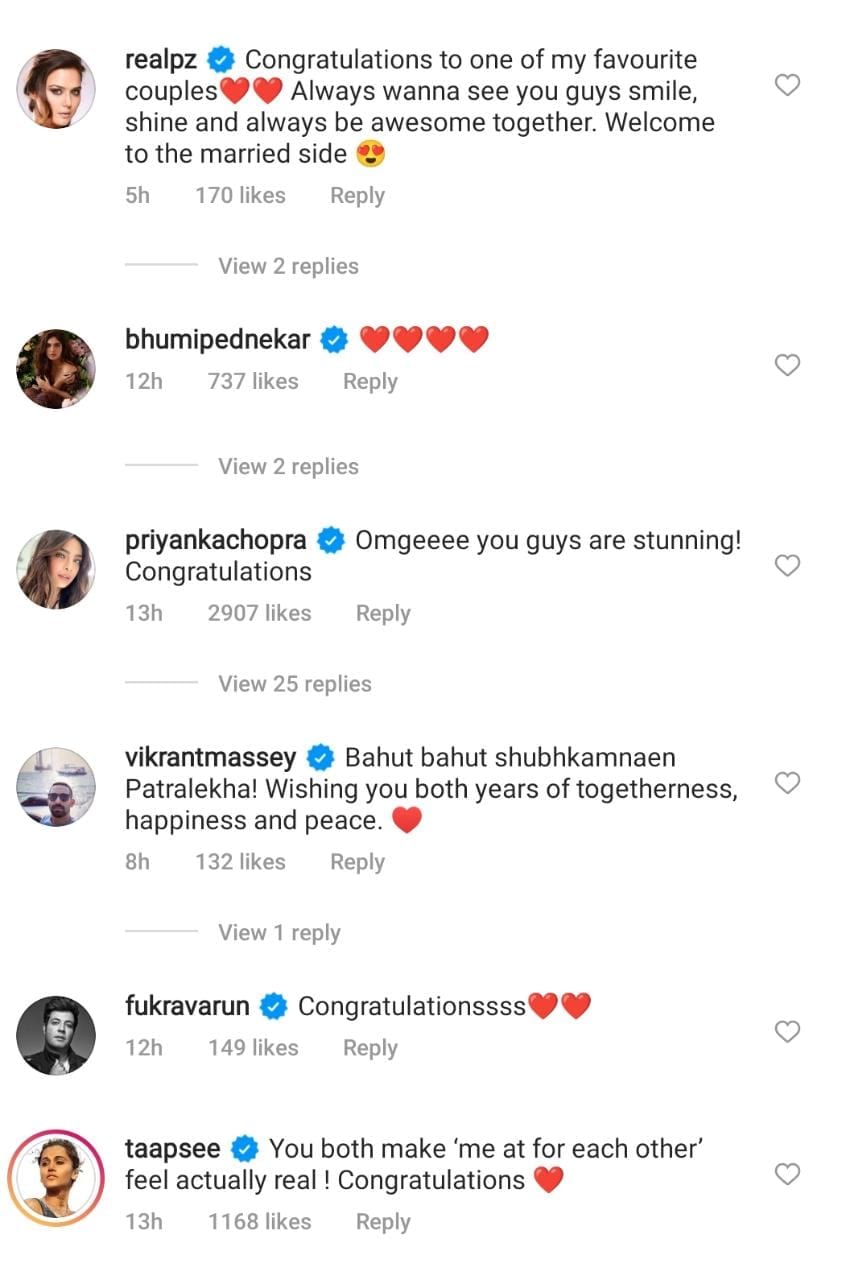 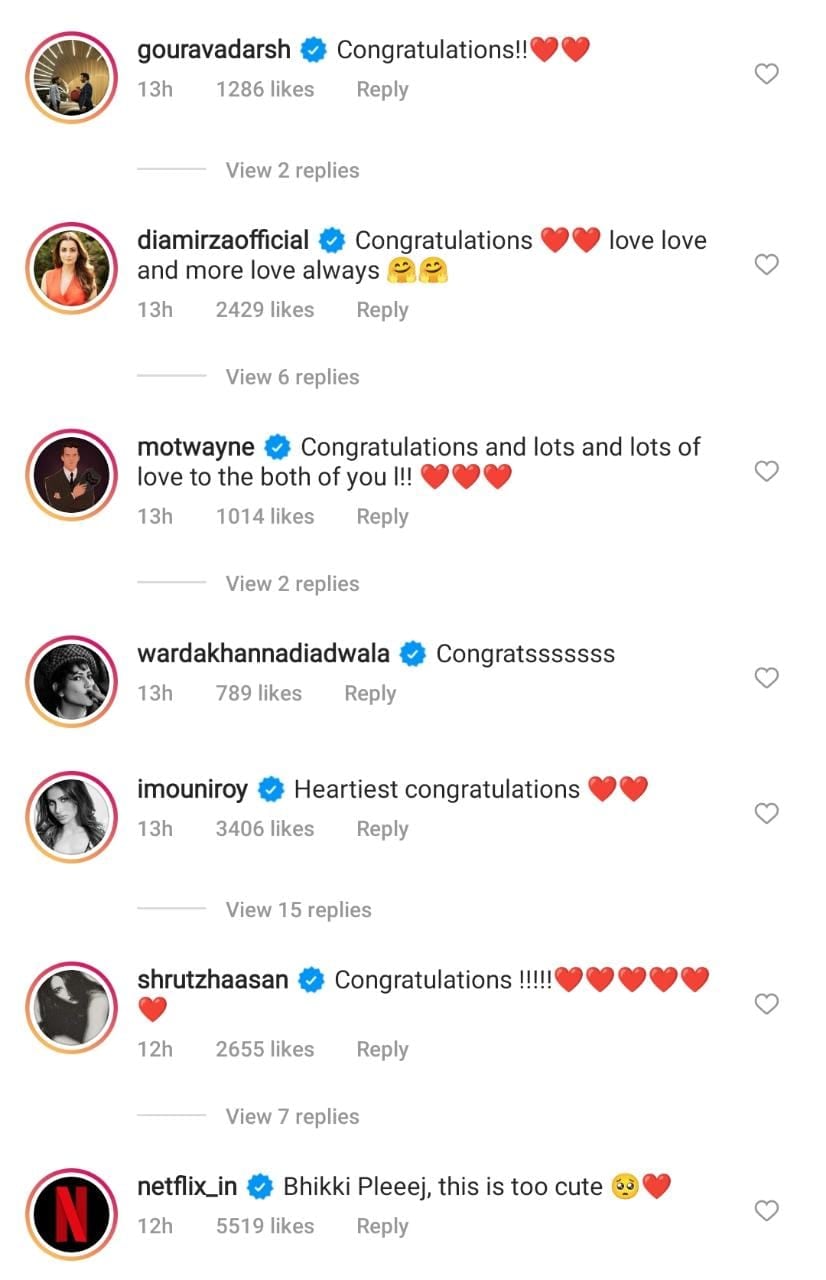 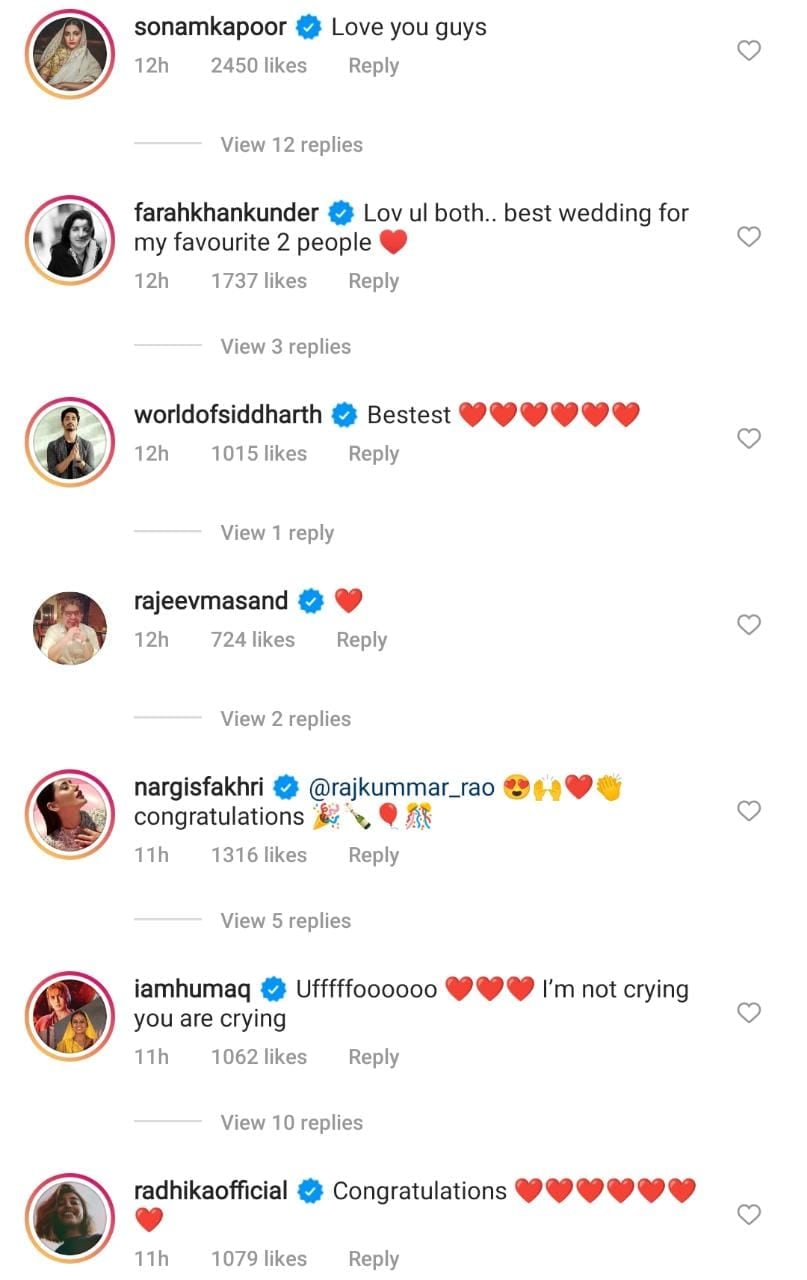 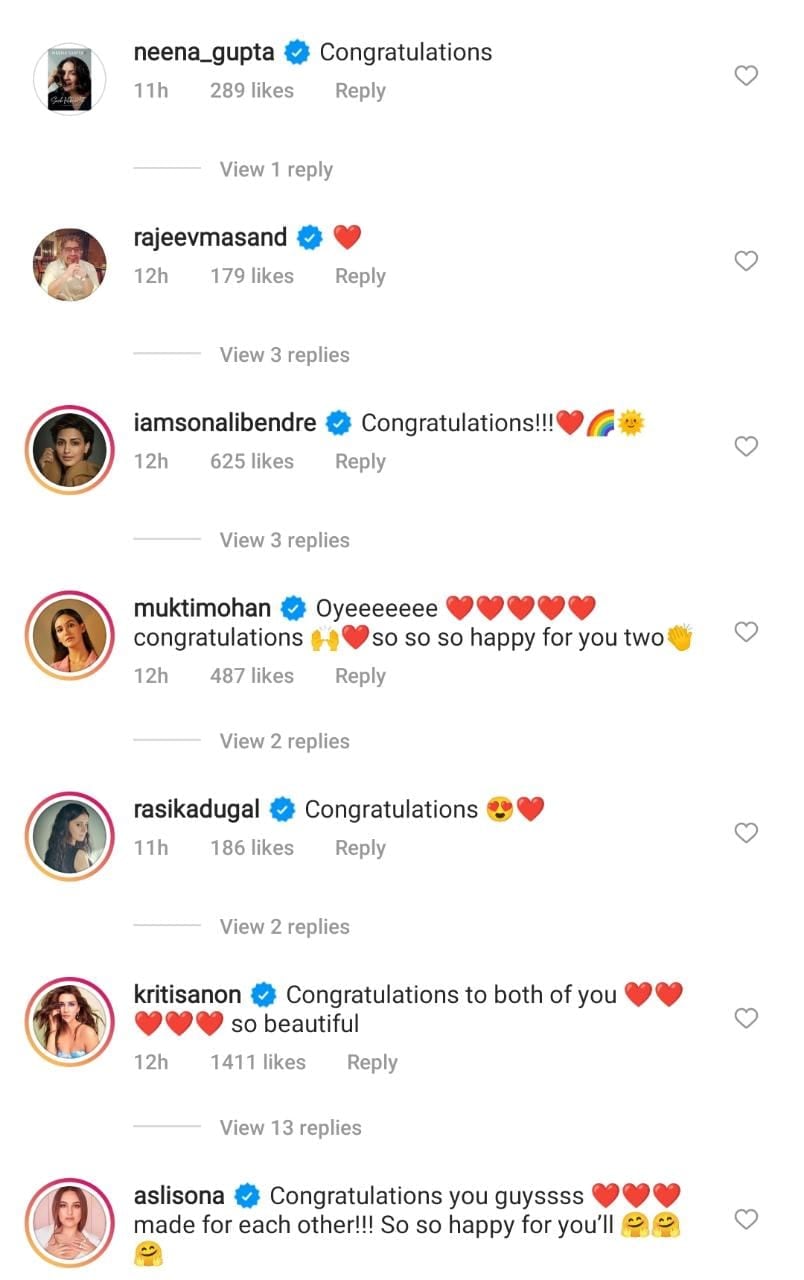 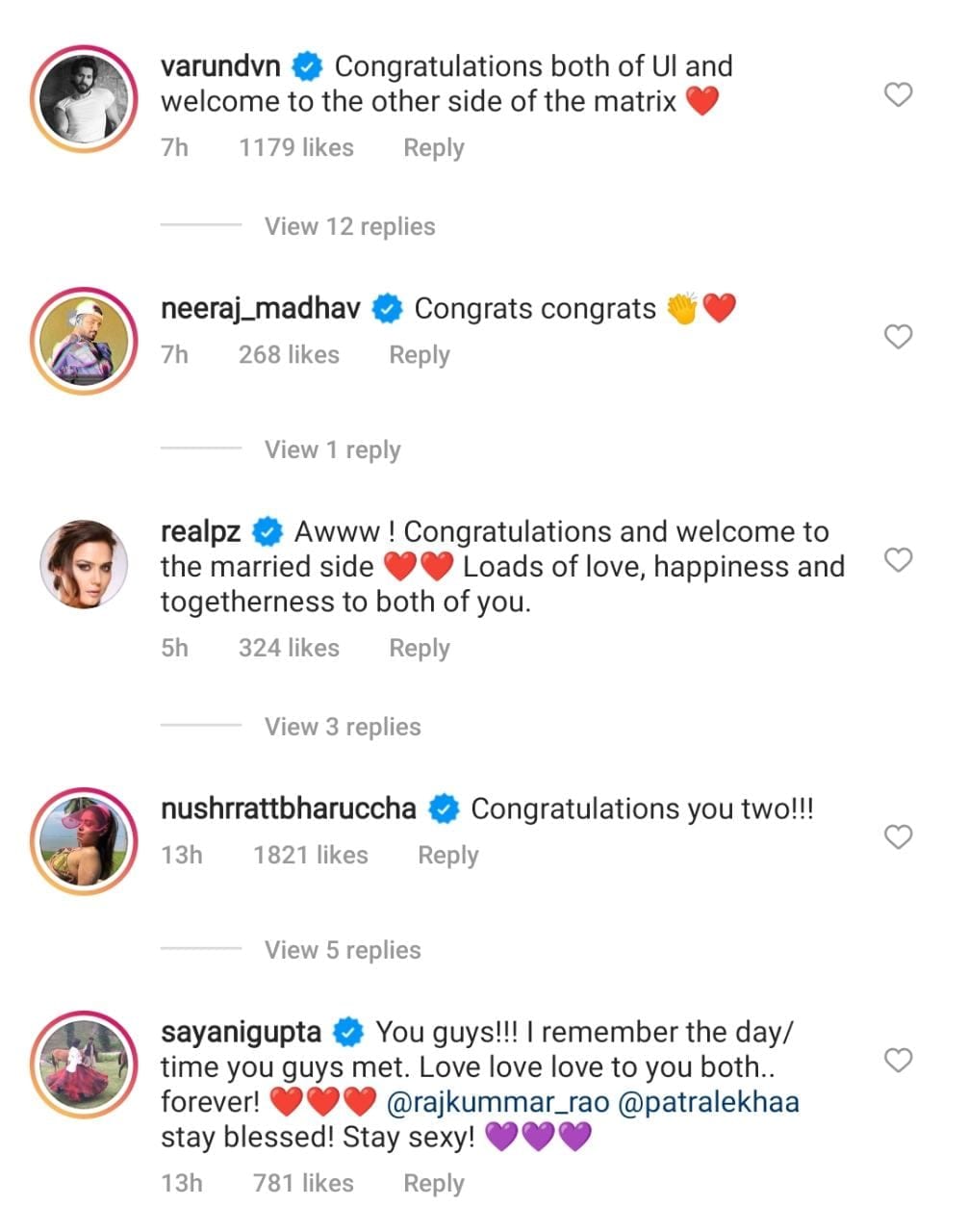 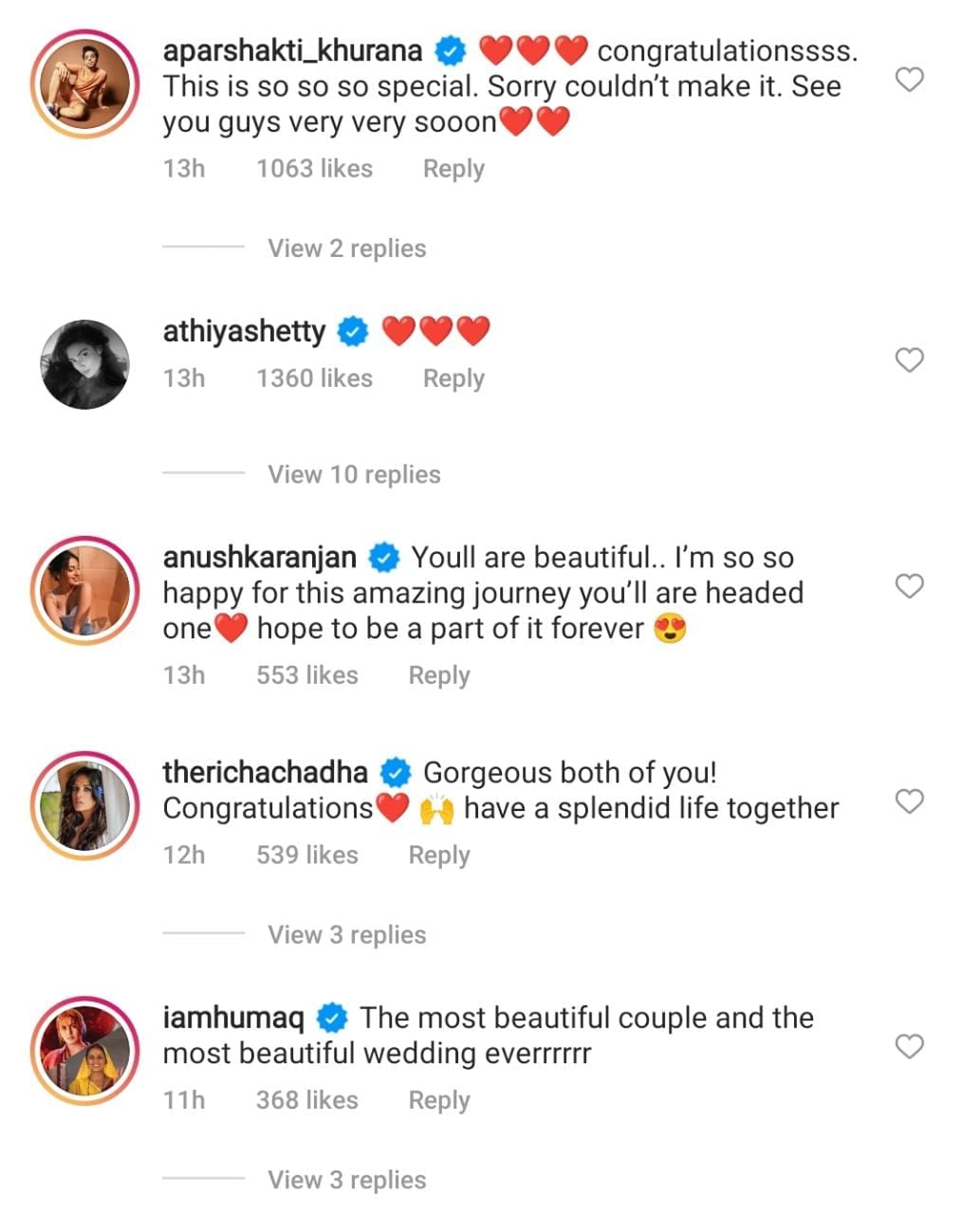 Screenshots of celebs' comments on Rajkummar Rao and Patralekhaa's posts.

On Monday, Rajkummar and Patralekhaa, who have been together for the past 11 years, shared beautiful pictures from their wedding with adorable captions. Check them out here:

The couple also hosted a grand reception party at The Oberoi Sukhvilas Spa Resort in Chandigarh on Monday. It was attended by Haryana Chief Minister Manohar Lal Khattar.