"He is very much the Haryana Hurricane, who won us our #firstworldcup," wrote Chiranjeevi 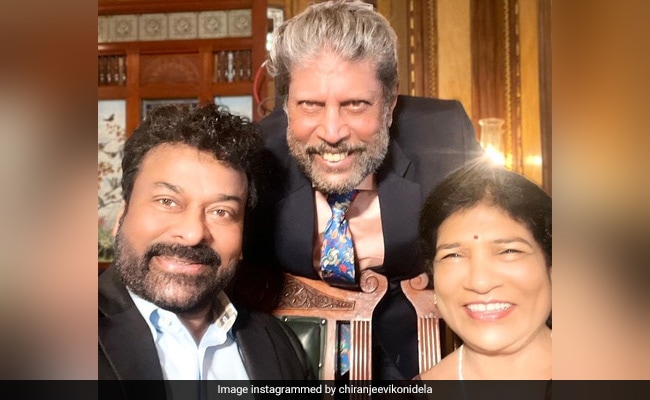 South star Chiranjeevi met his "old friend" and former cricketer Kapil Dev on Sunday in Hyderabad. Chiranjeevi was also accompanied by his wife Surekha. The Stalin actor posted pictures from their get-together on social media and wrote: "Wonderful meeting my old friend Kapil Dev after a long time. The exquisite Taj Falaknuma Palace setting made it even more special. Travelled back in time at multiple levels and fondly recalled old memories." Kapil Dev is fondly called "Haryana Hurricane" for his excellent game techniques. He was the captain of world cup winning team of 1983. In his post, Chiranjeevi was all praise of Kapil Dev, He added: "He is very much the Haryana Hurricane, who won us our #firstworldcup."

Filmmaker Kabir Khan has also made a film on Kapil Dev titled '83, which shows the story of Kapil Dev's captaincy in leading the Indian team to defeat the West Indies in the World Cup 1983. The film stars Ranveer Singh in the lead role.

Talking about Chiranjeevi, he married Surekha, daughter of late actor Allu Ramalingaiah, in 1980. The couple are parents to son Ram Charan, who is an actor, and two daughters - Sushmita and Sreeja. Chiranjeevi is also the uncle of actors Allu Arjun, Allu Sirish, Varun Tej, Niharika and Sai Dharam Tej.

In terms of work, Chiranjeevi has worked in several Telugu, Tamil and Kannada hits such as Khaidi, Gang Leader, Master, Indra and Vijetha. He was last seen in the 2019 film Sye Raa Narasimha Reddy, which also starred Amitabh Bachchan in a significant role. He will next be seen in Telugu film Acharya, directed by Koratala Siva.