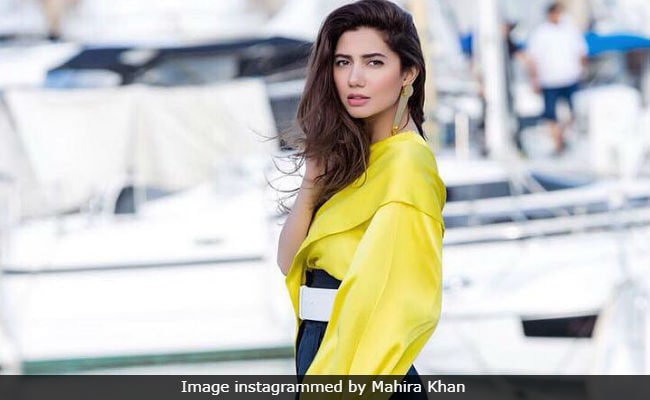 New Delhi: Pakistani Actress Mahira Khan's fashion game at the ongoing Cannes Film Festival is on the point. After A blue and white outfit from Elan, Mahira Khan changed into a bright outfit from Solace London's Spring Summer '18 collection for media interaction on the sidelines of the film festival. She added Christian Louboutin pumps for a chic finish. Mahira Khan shared her new look with her 2.8 million followers on Instagram. It's Mahira's debut at the Cannes Film Festival this year. She is attending the event as a brand ambassador of cosmetics giant L'Oreal (just like Aishwarya Rai Bachchan, Deepika Padukone and Sonam Kapoor, who represent L'Oreal from India).

Earlier in the day, Mahira posted a couple of pictures from her Cannes diary showing a nice outfit from the studious of Elan. Mahira looked beautiful in what appears to be a white halter-neck pantsuit and has aced her look with a kaftan in shades of blue, white and pink. "Feelin' blue, never felt so good," Mahira captioned one of her posts. "Stunning" and "the very beautiful, Mahira Khan" are some of the several comments posted on the actress' sun-kissed pictures at Cannes Film Festival.

And, in between the shots, Mahira posed for a picture in Cannes.

After a long journey (read, eventful) today we do nothing except for soak up the sun! Here's looking at you Cannes! @lorealhair @festivaldecannes #cannes2018

Mahira had confirmed her attendance with a picture of Arnold Schwarzenegger at the 1977 Cannes Film Festival.

Let's do this! #Cannes2018 Arnold Schwarzenegger at the 1977 Cannes Film Festival, where he presented the documentary "Pumping Iron."

On Twitter, a Pakistan-based fashion designer had praised Mahira as the choice to represent Pakistan on the Cannes red carpet. "Couldn't be more proud to have a sister who continues to open doors for future generations of Pakistan women. To make them believe they can achieve anything they want if they truly believe and love what they do," tweeted Hassaan Kahn.

Promoted
Listen to the latest songs, only on JioSaavn.com
Read their Twitter exchange here.

Couldn't be more proud to have a sister who continues to open doors for future generations of Pakistan women. To make them believe they can achieve anything they want if they truly believe and love what they do. 'When they go low, we go high' @TheMahiraKhan#Cannes2018#girlpower

Aww.. can't believe you are writing this. I love you the most. https://t.co/gig4Bbvyro

Mahira Khan is best-known for her show Humsafar. She made her Bollywood debut opposite Shah Rukh Khan in 2016 film Raees. She also featured in headlines recently for reportedly dating Bollywood star Ranbir Kapoor.
Comments
cannes 2018mahira khanmahira at cannes