"Congratulations to the entire team of Delhi Crime on the win at the International Emmy Awards. Bravo!" tweeted Priyanka Chopra 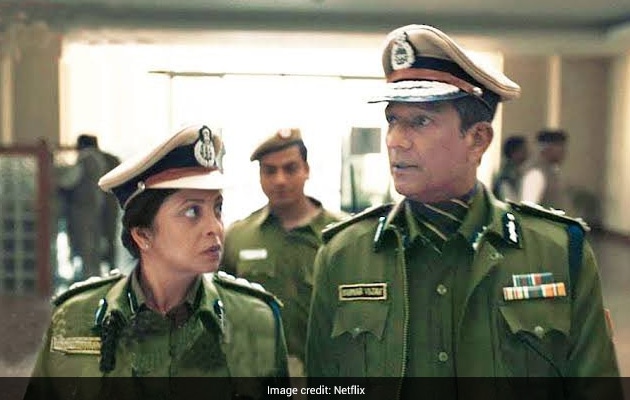 Netflix show Delhi Crime has been trending since Monday for its big win at the 48th edition of the International Emmys Awards. Delhi Crime won Best Drama and inevitable was showered with a whole lot of congratulatory messages. Hrithik Roshan was one of the first celebs to congratulate the show's team and stars such as Priyanka Chopra, Anushka Sharma, Deepika Padukone and Ranveer Singh followed suit. Priyanka, who recently produced the Netflix film Evil Eye, tweeted: "Congratulations to the entire team of Delhi Crime on the win at the International Emmy Awards. Bravo!"

Congratulations to the entire team of #DelhiCrime on the win at the International Emmy Awards. Bravo!@ShefaliShah_@shrishtiarya@RasikaDugal@_AdilHussain@rajeshtailang@RichieMehta@CastingChhabra@GoldenKaravan#SanyukthaChawlaShaikh@Yashaswini__@IvanhoePictures@iemmyshttps://t.co/I9zq7TTF8c

Mom-to-be Anushka Sharma, who is also a producer, shared this message in an Instagram story: "Congratulations to the entire team of Delhi Crime on winning the Emmy." 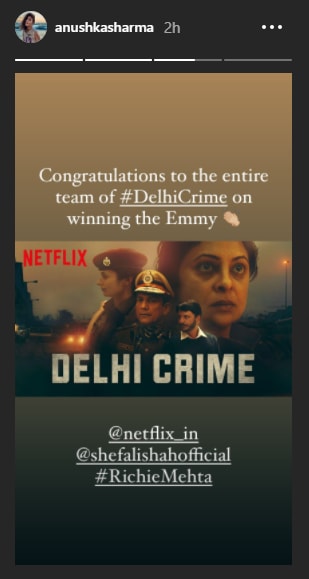 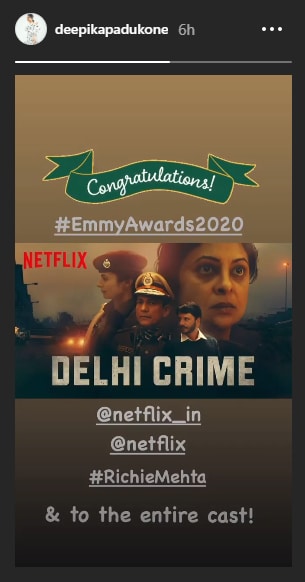 Ranveer Singh, who has worked with Delhi Crime star Shefali Shah in Dil Dhadakne Do, described the big win in these words: "An unprecedented and incredible feat. Congrats to my friend Shefali Shah and the team of Delhi Crime." 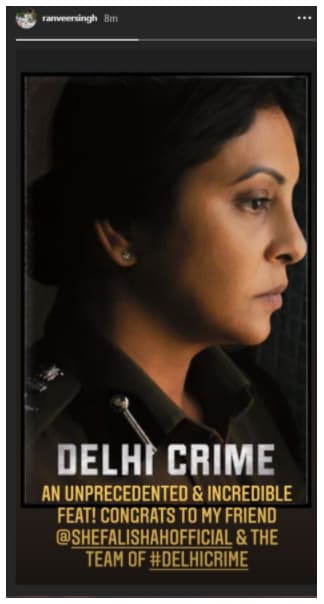 Here's what Hrithik Roshan tweeted: "Take a bow, Richie Mehta and the talented team of Delhi Crime for your well-deserved win at Emmys 2020! Congratulations on setting an International precedent."

Take a bow @RichieMehta & the talented team of #DelhiCrime for your well deserved win at #Emmys2020! Congratulations on setting an International precedent - @ShefaliShah_@_AdilHussain@RasikaDugal@rajeshtailang ????????

Directed by Richie Mehta, Delhi Crime followed the investigation of the December 2012 Delhi gang rape. It stars Shefali Shah as the Deputy Commissioner Of Police in charge with the investigation, along with Rasika Dugal and Adil Hussain in key roles. For the International Emmys, Delhi Crime was nominated along with shows such as Charite: Season 2 (Germany), Criminal UK (United Kingdom) and El Jardín de Bronce (The Bronze Garden): Season 2 (Argentina).