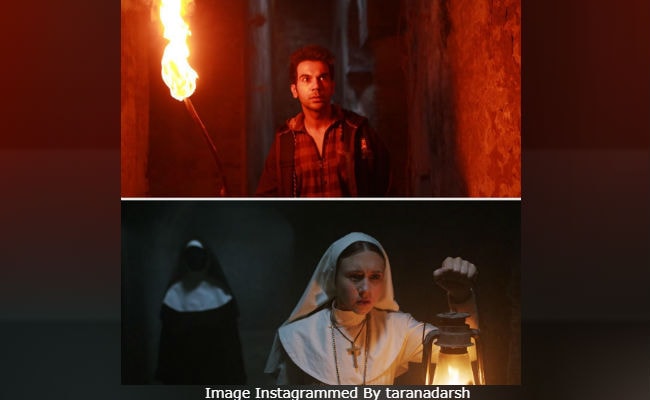 Still from Stree and The Nun (Image courtesy: taranadarsh)

Shraddha Kapoor and Rajkummar Rao's Stree continues to impress the audience in India while Hollywood film The Nun is dominating the North American box office, respectively. Stree which released a couple of Fridays ago, has earned over Rs 85 crore so far and despite a bandh on Monday, it managed to collect Rs 3.31 crore, trade an analyst Taran Adarsh reports. In one of his previous tweets, Mr Adarsh had said that Stree, a horror comedy, is "heading towards blockbuster status." Meantime, The Nun, which opened in India on Friday, has collected over Rs 18 crore while news agency AFP reports that Bonnie Aarons' horror film has earned $53.8 million in North America.

"The Nun, a spinoff from The Conjuring series, dominated the North American box office in its opening weekend, raking in $53.8 million and becoming the latest box office win for Warner Bros.," the AFP report states.

The box office report of Stree is as follows.

At the Indian box office, Stree emerged as the clear winner, despite the release of films like JP Dutta's Paltan, Sajid Ali's Laila Majnu and Manoj Bajpayee's Gali Guleiyan.

Shraddha Kapoor and Rajkummar Rao's Stree is based on a ghost, named Stree by the residents, is suspected to be behind the mysterious disappearances of the men. The film also stars Aparshakti Khurrana and Pankaj Tripathi in pivotal roles.

Directed by Corin Hardy, The Nun is set against in Romania in the early 50s. Apart from Bonnie Aarons, the film also stars Demian Bichir, Taissa Farmiga and Jonas Bloquet.