"I love you, bhaiya. Happy birthday," the actor wrote 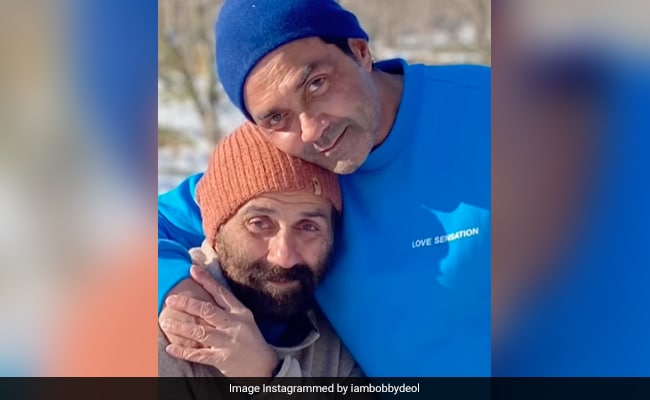 Sunny and Bobby Deol in a still from the video. (courtesy: iambobbydeol)

Happy birthday, Sunny Deol. The actor turns 65 today. From his family to friends, everyone has swamped social media with birthday wishes for the star. The sweetest one came from Sunny Deol's brother, actor Bobby Deol. He has shared a beautiful picture with his “bhaiya” on Instagram. In his birthday note, Bobby Deol simply wrote, “I love you, bhaiya. Happy birthday” and made their fans go aww. He has also picked The Hollies' He Ain't Heavy, He's My Brother as the background music. Several celebrities have dropped wishes for the birthday boy in the comments section. Chunky Panday, who has co-starred with Sunny Deol in many films such as Vishwatma, Lootere and Paap Ki Duniya, wrote, “Happy happy birthday, dear Sunny.” Actor Rahul Dev said, “Happy birthday, Sunny bhaiya.”  Actress Esha Gupta left red hearts under the post.

Bobby Deol has also shared a sketch made by one of his fan pages to mark Sunny Deol's birthday. 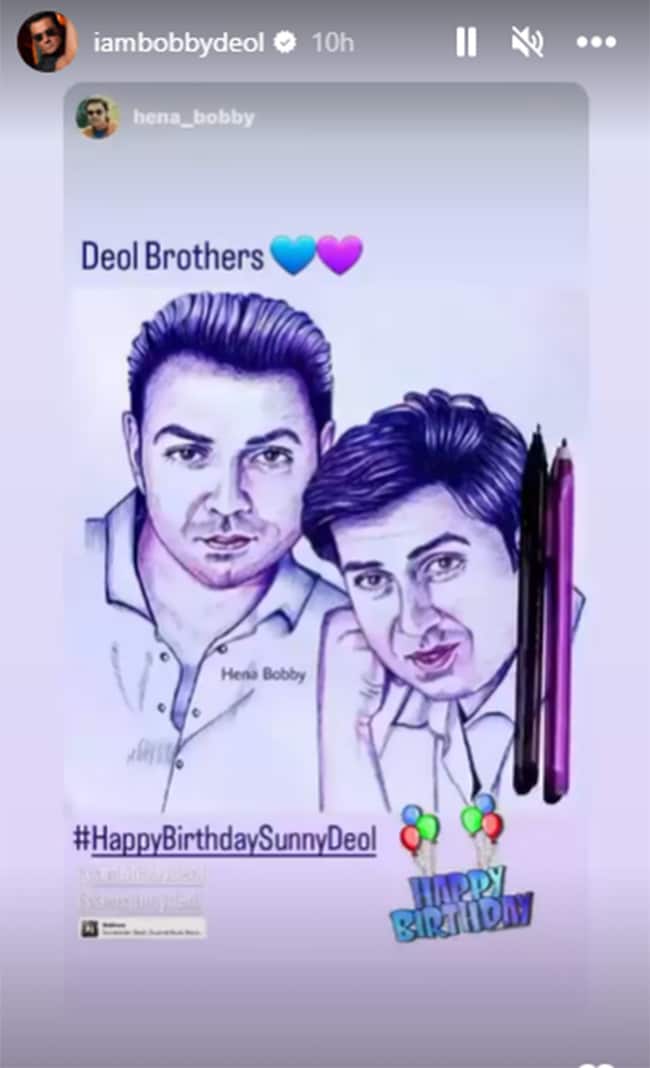 The Deol brothers have also worked together in a couple of films, including Dillagi, Apne, Yamla Pagla Deewana and Poster Boys.

Sunny Deol and Bobby Deol share a great bond and the two never fail to express their love for each other on social media. On the occasion of Dussehra, this year, Sunny Deol shared a clip from Bobby Deol's debut film Barsaat and wrote, “ 27 years ago on Dussehra we released Barsaat, the debut of a superstar, my rocking Bobby.”

Sunny Deol was last seen in Chup: Revenge of the Artist. It was directed by R Balki and also featured Amitabh Bachchan, Dulquer Salmaan, Shreya Dhanwanthary, Ranjit Deval and Pooja Bhatt, among others.

The actor is known for his performances in movies like Gadar: Ek Prem Katha, Ghayal, Big Brother, Damini, Darr, Border, Karz, and Tridev.

In terms of Sunny Deol's upcoming films, he will co-star with son Karan, dad Dharmendra and brother Bobby Deol in Apne 2. The film is directed by Anil Sharma. Earlier this month, Sunny Deol completed the final reading for Apne 2 with Karan.

Sunny Deol is also busy shooting for films like Gadar 2 and Fateh Singh.