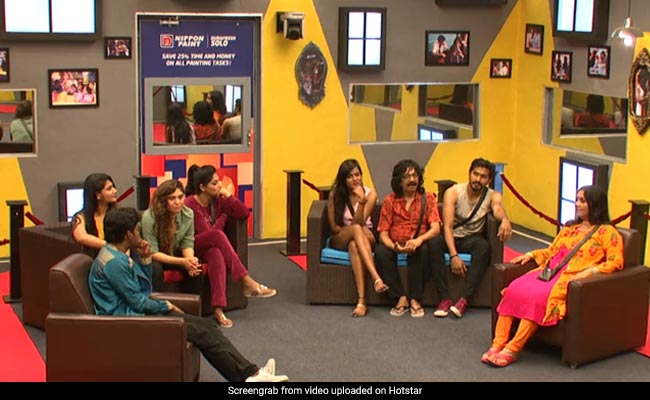 On the 99th day of Bigg Boss Tamil 3, the four finalists enjoyed their day singing and dancing. The final four contestants - Sandy, Mugen, Losliya, Sherin - were asked to put forward their best claims and special talents suggesting why they should emerge as the winner of Bigg Boss Tamil 3. Following this, the evicted Bigg Boss Tamil 3 contestants namely Meera, Mohan, Fathima and Reshma entered the house. They exchanged pleasantries and surprised the finalists with gifts. All the housemates were called into a room which was decorated with pictures of important events that took place in the Bigg Boss Tamil 3 house. Going down the memory lane, the housemates relived their best moments in the house through the photographs.

Reshma and Mohan spoke about Mugen Rao who is in the good books of all Bigg Boss Tamil 3 contestants. They also spoke about the famous phase uttered by Mugen "Anbu mattum than annathai" (Only love is orphan). Reshma asked Mugen not to consider himself alone anymore.

Mugen recalled the moment when his mother and sister entered the Bigg Boss house as his favourite memory. With this, the contestants ended the day in a happy mood.

Kavin and Tharsan who had made their exit from the Bigg Boss house recently shared a message on their social media pages, thanking people for their continuous support.

The promo for Tuesday's episode shows Mugen singing in the house. He is seen thanking Sandy for all the entertainment he has provided for keeping the Bigg Boss Tamil 3 house lively.