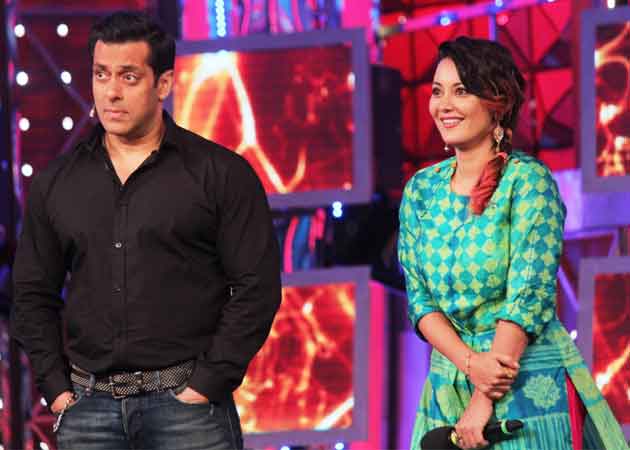 Minissha with Salman on the sets of Bigg Boss 8

The 29-year-old Bachna Ae Haseeno star is the fifth contestant to go out of the Bigg Boss house after Sukirti Kandpal, Deepshikha Nagpal, Natasa Stankovic and Soni Singh.

The actress was first sent to a secret room along with actor and co-contestant Puneet Issar where they watched the happenings of the house for some time, but she was later evicted while the veteran star was sent back to the house.

Minissha says her experience on the show was wonderful and she has been evicted at the right time as she feels five weeks were enough for her to connect with the audience, which was her sole purpose for doing the show.

"I am happy to be out of the show right now. I am coming out with positivity and that is what matters. Five weeks is enough for people to me and I am happy I have connected with them. I will surely miss the house so it is a bittersweet feeling," Minissha told PTI.

The actress was one of the most calm and composed contestants on the controversial show, hosted by Bollywood superstar Salman Khan. She was not involved in many fights in the house and was seen stating her opinion in a quiet manner. Minissha said that living in the 'Bigg Boss' house tested her patience but she chose not to react and deal with things calmly.

"We were all under immense pressure. The physical conditions were also tough, so fights and conflicts were natural. Everything in this house ends up being blown out of proportion because that is the nature of the place. But it is up to you, if you want to let a spark turn into a fire or whether you let it die down," she said.

Promoted
Listen to the latest songs, only on JioSaavn.com
Minissha adds she will miss a lot of people on the show as she had made great connections during her stay.

"I have known Arya from before the show, so he has always been a friend and will always be. The new people I met here like Diandra and Upen, I will miss them and will surely meet them outside. I will also meet Soni, Natasa and Sukirti," she said.