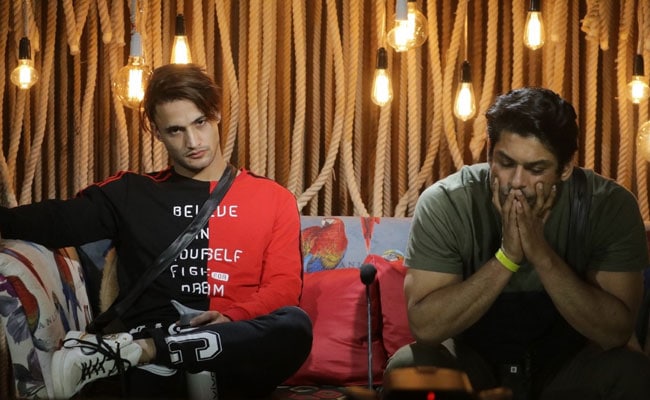 Sidharth Shukla and Asim Riaz in the confession room

In tonight's episode of Bigg Boss 13, the show opened to Sidharth Shukla and Asim Riaz involving in another argument. Both of them were found sitting in the confession room as Bigg Boss explained how troublesome it is for the two of them to get into arguments over and over again. However, they again ended up in a messed up argument soon after Rashami Desai was found cooking Rabri in the kitchen. The contestants of the house ended up arguing over ingredients in the kitchen. In this episode, Hina Khan took a surprise entry into the house. She was invited to the house to give the 'Elite Club' membership to contestants Mahira Sharma, Rashami Desai and Aarti Singh. Hina Khan entered the house and greeted the contestants with hugs.

The process of selection required Hina Khan to choose only two out of the three contenders for next level of selection. She took all three contestants separately in one corner to initiate a one on one conversation. Aarti Singh got the first chance to explain why she is a deserving candidate. Aarti also added that she would like Rashami as her competitor in the task for 'Elite Club' membership. Second in line was Mahira Sharma. She tried to explain why she should be in the club. However, after talking to the third contestant Rashami Desai, Hina Khan decided to remove Mahira from the list. Hina justified by saying that Mahira does not take her own decisions and is dependent on Paras Chhabra for the same.

Hina declared that she found Aarti and Rashami as more deserving candidates as they have contributed more to the Bigg Boss house.

Later in the episode, Hina Khan gave Aarti and Rashami the deciding task to get the membership. The task was called 'Kabhi Haan Kabhi Na.' Hina had the power to decide whether the given task by rest of the inmates is valid or not. The task starts by Rashami, who agreed to shave her head. However, the task was later changed to shaving only three lines on one side of the head. Meanwhile, Aarti on the other hand agreed to chop off her hair till shoulder length. Both the contestants play sportingly.

Within seconds, Sidharth and Asim again found themselves in an argument. They create a scene in front of Hina Khan as she quietly stood there and watched the house inmates shouting and screaming. Bigg Boss intervened and called the two of them to the confession room the second time. Meanwhile Hina Khan was asked to continue the task without Sidharth and Asim's presence. Rashami daringly applied mehendi onto her face, whereas Aarti ate 20 chillies.

Meanwhile, Sidharth confessed that he would leave the show as he cannot stand Asim in the house.