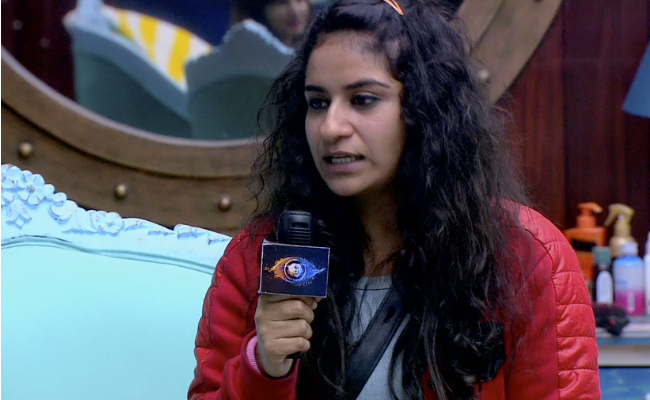 Surbhi Rana in a still from Bigg Boss 12.

In tonight's episode of Bigg Boss 12, Deepak Thakur and Surbhi Rana were seen competing for the captaincy in the house. However, unlike other weeks, a special guest was invited to judge the winner of the task. Renowned journalist and TV presenter Sweta Singh was invited to judge the captaincy task. She announced a special task titled 'Breaking News,' as a part pf which, both Surbhi and Deepak had to report all the happenings of the house in the form of breaking news. As a part of the task, Surbhi Rana questioned the existence of Happy Club in the house. Romil, a member of the club and also a close friend of Surbhi, refused to comment on the situation.

.@SwetaSinghAT is about to drop some breaking news regarding the housemates! Witness all the action tonight at 9 PM. #BB12#BiggBoss12pic.twitter.com/i9sfz0twuK

Things took an ugly turn, when, in order to report news, Deepak sort out started a fight with Megha Dhade. In order to provoke Megha, Deepak made a few condescending remarks and later, claimed that the Big Boss house is haunted. Surbhi, on the other hand managed to scoop interesting stories, she dug up the old Sreesanth and Harbhajan Singh controversy, to which Sreesanth responded by saying that he loves Harbhajhan Singh and that he wants to apologise to him. Needless to say, Surbhi's fierce and unbiased coverage was appreciated by not only the housemates but also Sweta. Surbhi emerged victorious in the task and became the captain once again.

In another segment of the show, TV actor Mohit Suchanti remained on every housemates radar. Dipika Kakkar, who has previously worked with Mohit in a television show, was extremely vocal about her hatred for fellow contestant and she also said that she is indifferent to Mohit's existence in the house. Sreesanth too, seemed reasonably upset with Mohit and made a few personal comments about Mohit's family members.

In tomorrow's episode, the guilty contestants will be sent to the Kal Kothri. Which contestant will it be?