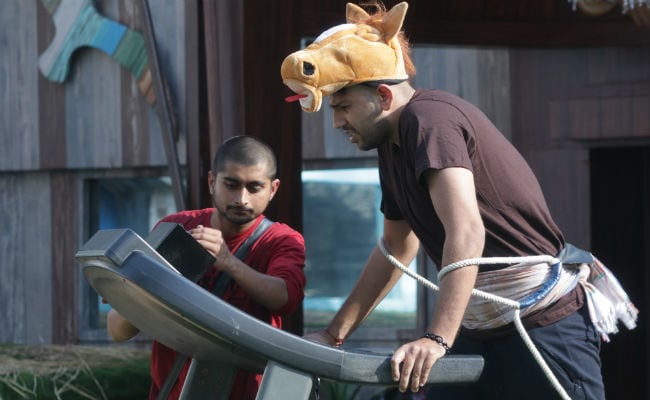 In tonight's episode of Bigg Boss 12, the contestants woke up to the song Lakdi Ki Kaathi, which sort of gave the housemates a subtle hint of this week's luxury budget task, which decides the extra commodities contestants will get, in order to make their stay more comfortable in the upcoming week. The task will also have a simultaneous impact on the captaincy task as well as the upcoming nomination. This week's luxury budget task is titled Ghoda Gaadi, as a part of which, Dipika Kakar and Deepak Thakur will not only be playing the role of moderators but will also be competing against each other. All the other contestants will be playing the role of horses. As a part of the task, Dipika and Deepak had to convince the 'horses' to cover maximum distance for them, which will double as a cart. The horses will have to collect the carrots, which have been tied to treadmills.

Besides the luxury budget task, Dipika and Sreesanth's changed equation seemed to be the center of attention. In one segment of the show, S Sreesanth questioned Dipika's loyalty towards all the housemates and said that her deeds might affect the perception of the audience as well as her fans. Dipika seemed extremely upset on hearing Sreesanth's opinion about her and broke down. Despite Sreesanth's unstable relationship with Dipika, he decided to suppoert her in the luxury budget task. However, he was constantly distracted by Romil Chowdhary, who belonged to Deepak Thakur's team.

Another highlight of tonight's episode was Jasleen Matharu and Anup Jalota's conversation. Anup, who had been silently observing all the activities of the housemates from the secret room, asked Jasleen to beware of Saurabh Patel. The devotional singer seemed to be slightly insecure about Jasleen and Saurabh's budding relationship.