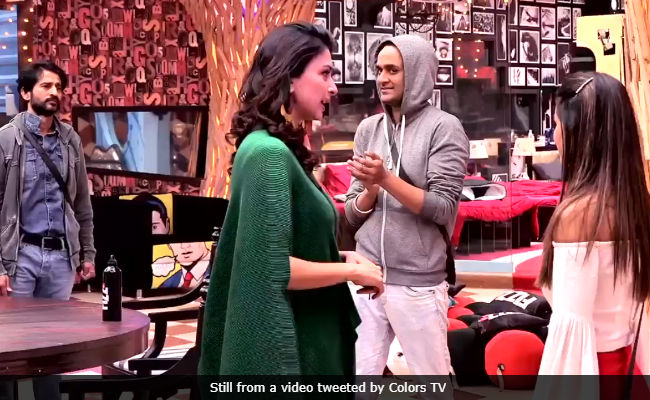 New Delhi: Bigg Boss' latest task has caused an emotional storm inside the house. After almost two months of staying in Bigg Boss' house, contestants got to meet their family members vis-a-vis a task. But everything's not a cakewalk inside the house. The contestants, in order to win the task, have to stay frozen when asked to by Bigg boss even if they have to watch their loved ones go without getting a chance to speak to them. In tonight's episode, Hiten Tejwani's actress wife Gauri Pradhan will enter the house to meet her husband. After assuring Hiten that everyone in the family is okay and love the way he's progressing in the game, Gauri turns to other contestants, as seen in a clip released by Colors TV.

She rebuked (though very politely) Hina Khan for calling her husband "spineless" in the previous week. She told Hina: "I think he is playing really well. The message that I sent - 'Be a leader, not a follower' - was for Hiten and not for everyone to analyse it. It was a personal message." To brush your memory, Hina lost her cool on Hiten and reminded him of Gauri's aforementioned message before calling him "spineless."

Gauri also tells Arshi that she doesn't have a problem with her flirting with Hiten while she will tell Vikas Gupta to not to make a fool of her husband in his attempt to be the 'mastermind.' She thanks Shilpa Shinde for taking good care of everyone including Hiten and to Akash she says that she is disappointed by his behavior in recent days.

Promoted
Listen to the latest songs, only on JioSaavn.com
Tonight, Luv Tyagi will meet his father and Hina Khan's boyfriend Rocky Jaiswal will also enter the house. Rocky, who has supported Hina from the moment she started the game, will also propose to her on national television tonight.