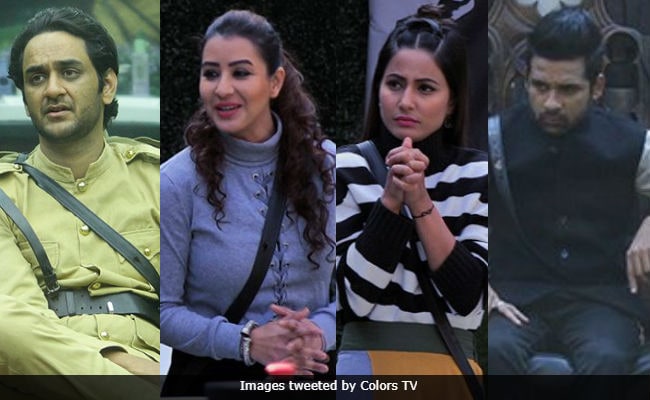 New Delhi: With just one day left for Bigg Boss 11 finale, celebrities are rooting for their favourite contestant(s). Hina Khan, Shilpa Shinde, Vikas Gupta and Puneesh Sharma are the final four contenders vying for the winner's trophy. Their tasks and performance during their three-month stay have created a massive fan following. Celebrity followers of the reality show have also time and again given their opinion on the developments in the game. Some of Hina, Shilpa, Vikas and Puneesh's celebrity friends have picked side while some of them have more than one favourites. Here's a look at who's rooting for whom.

The Bhabhiji Ghar Par Hai actress has many followers on social media. Among her many fans is former Bigg Boss contestant Nitibha Kaul. Speaking to Indian Express, Nitibha said: "Shilpa is my favourite. Her journey has been dynamic. She started on a high pitch with some action, controversies and fights with Vikas. Then she became a motherly figure."

Manu Punjabi, who participated in Bigg Boss 10 with Nitibha, told Indian Express though he 'relates' to Vikas' journey but the "clean chit winner (of Bigg Boss 11) is Shilpa Shinde." He also added: "Puneesh does not deserve to be the winner. He does not have it in him."

Last year's Bigg Boss winner Manveer Gurjar roots for Vikas. He told news agency IANS: "I find Vikas (Gupta) very positive. I am rooting for Vikas Gupta. I want him to win Bigg Boss. I feel people should support participants who they admire."

Actor Ravi Dubey is truly impressed with Vikas' game. Recently he tweeted: "Vikas you are a template of how this game should be played. You have upheld yourself with grace in a place where most lose their ground." He appealed to his fans to vote for Vikas.

Vikas u r a template of how this game should be played ..u have upheld yourself wth grace in a place whr most lose their ground,amazingly done my friend all of us are proud,I think if You can handle Bigg Boss you can handle life and Vikas you can handle life,dil se vote karo sab pic.twitter.com/OotNnJFr8Q

Hina Khan participated in Khaton Ke Khiladi before this and her colleague from the stunt based reality show Geeta Phogat has been a constant support on social media. She rooted for Hina Khan against trolls and others who condemned her actions in the house. Geeta Phogat has always maintained that Hina deserves to win.

Hina's Yeh Rishta Kya Kehlata Hai co-star Rohan Mehra, who also participated in Bigg Boss last year, also wants her to win this season of the reality game show. "So proud of you today. Doing your task keeping all the sentiments in consideration. Guys vote for Hina Khan now! She deserves the win!" he tweeted.

So proud of u today! Doing ur task keeping all the sentiments in consideration! Guys vote for hina khan @eyehinakhan now! She deserves the win! pic.twitter.com/We9lMp0MCf

There are some celebrities, whose loyalties are divided. Like Devoleena Bhattacharjee, star of TV show Saath Nibhaana Saathiya, tweeted a few days back: "I strongly believe Hina Khan or Vikas Gupta should win." (PS: She doesn't like Shilpa Shinde at all)

Actor Ajaz Khan, who participated in Bigg Boss 7, still follows the show and this time he's 'confused' between Shilpa and Hina. He's impressed with both the actress' journey and tweeted:

Promoted
Listen to the latest songs, only on JioSaavn.com
Bigg Boss 11 finale will be aired tomorrow.

(With inputs froM IANS)