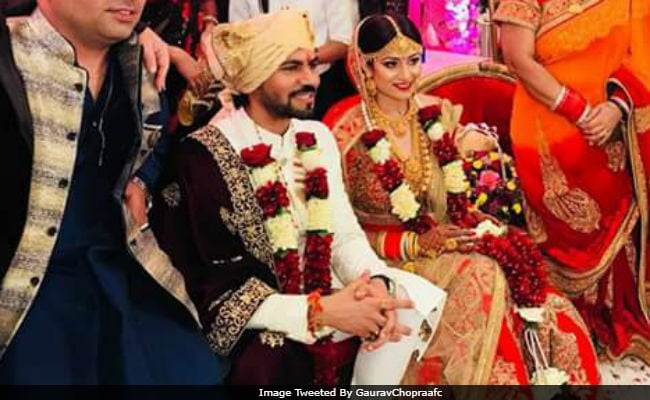 Gaurav Chopra and Hitisha at their wedding (Image courtesy: GauravChopraafc)

New Delhi: Television actor Gaurav Chopra is now married. The Bigg Boss 10 contestant married Hitisha in an extremely private ceremony, which was reportedly held in Delhi, his hometown. A picture of Gaurav, 38, with his bride, is shared by his fan club on social media. Hitisha was dressed in a red lehenga with beautiful gold jewellery while Gaurav complemented her in an off-white sherwani and aced his look with a maroon velvet shawl. It appears that Gaurav and Hitisha's wedding was attended by only family members and close friends. Gaurav's Bigg Boss 10 housemate Karan Mehra and his wife Nisha Rawal also attended the wedding. The couple's pictures have been shared widely on Instagram.

Take a look at Karan and Nisha's pictures.

A day ago, Karan posted a picture of himself, wearing a sherwani and captioned it as, "Living another night. A special something to look forward to." Comments like, "Karan is going to Gaurav's wedding," was posted.

Living another night. A special something to look forward to . Outfit: @jatinmalikcouture . . #JatinMalikCouture

Gaurav Chopra was earlier dating TV actress Mouni Roy, best-known for her role in Naagin. The ex-couple together participated in the reality show Pati Patni Aur Who.

Promoted
Listen to the latest songs, only on JioSaavn.com
Before Mouni, Gaurav dated Narayan Shastri, with whom he featured on the couple dance reality show Nach Baliye 2.

Gaurav Chopra is the star of TV shows like Doli Armaano Ki, Gulmohar Grand, Left Right Left, Ghar Ki Lakshmi Betiyann and Uttaran. During his stint in Bigg Boss 10, his friendship with VJ Bani was one of the most-talked about. Manveer Gurjar was declared the winner of Bigg Boss 10.