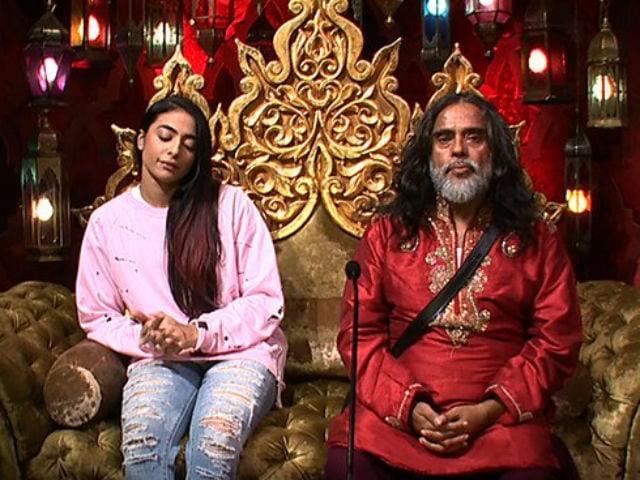 New Delhi: The contestants on Day 80 of Bigg Boss 10 woke up to the song Dhadak Dhadak. The day began with Swami Om giving an explanation to Manu and Manveer for making personal remarks at Manu the previous day. He then started with his drama and wrote mujhe maaf kardo in a piece of paper and hung it around his neck to ask for votes. Later, Bigg Boss announced that the maalgaadi task will start again and all the contestants were asked to get inside the jail. Even before the buzzer rang, Swami Om sat inside the maalgaadi, just to trouble the others.

Looks like @TheManuPunjabi is upset with #OmSwami because of his negative opinions about him! #BB10pic.twitter.com/IZekGSpl24

His unreasonable behaviour lead to a major fight between Swami Om, Manu and Nitibha, as he tried to snatch Nitibha's umbrella. However, he hurt himself in the fight and started bleeding. The controversial self-styled godman's behaviour agitated the others while Bigg Boss called him inside the confession room. He started crying inside the confession room and blamed the fellow contestants for hurting him. After giving him medical attention, Bigg Boss rebuked Swami Om for breaking the rules and getting inside the maalgaadi even though he had quit the task.

The task finally started again and the first one to be released by jailers Monalisa and Rohan was Manveer and then Manu was asked to leave and only Nitibha was left in the game.

Swami Om again started with his 'drama' and told Manu and Manveer that Nitibha is not worth winning the game. Nitibha got miffed and asked him to stop speaking about her.

Meanwhile, the final siren rang and the task ended. Bigg Boss then asked Rohan and Monalisa to reveal the amount attributed against each contestants' name. The housemates managed to increase the winning amount to Rs 43,99,206.

Bigg Boss also announced that Bani and Swami Om will fight for captaincy and the task will be announced soon.

Rohan and Lopamudra meanwhile discussed about captaincy and whom they would vote. Lopamudra, who was angry with Bani for quitting the task very early said that she would vote for Swami Om while Rohan expressed his views in Bani's favour.

Soon Bigg Boss introduced another task, where the contestants had to take interesting selfies inside the house in a given time. Swami Om was made the director of the task while Manveer played the role of assistant director.

Promoted
Listen to the latest songs, only on JioSaavn.com
Swami Om then declared that he would be a part of every selfie and fought with Manu and Manveer, who tried to stop him.

As the day ended, Swami Om expressed his desire to become a captain in front of Manu and Manveer and asked them to vote for him.