Bhagyashree, 49, Is Setting Fitness Goals High With These Workout Pics 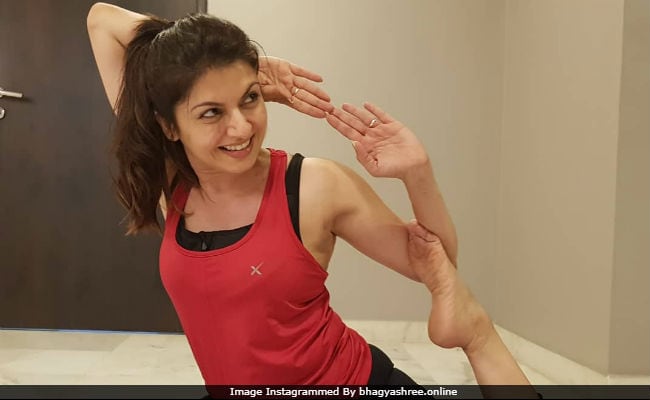 New Delhi: Salman Khan's Maine Pyar Kiya heroine Bhagyashree is setting fitness goals very, very high by posting these amazing pictures and videos from her workout sessions. The 49-year-old actress has shared several pictures of herself preforming yoga, stretching exercises and quads. In every post, Bhagyashree has explained the exercise and used hashtags like 'back to basics' and 'workout motivations' to describe them. "Seek higher goals, climb mountains and conquer oceans. You are stronger than you know and more capable than you think! You are the sky, the earth and all that in between... you are the world," she captioned one of her posts. "I am truly impressed with your fitness regime," a user commented on her latest picture while others have asked to her make a comeback to films.

Here are the pictures. (Take notes).

Seek higher goals, climb mountains and conquer oceans. You are stronger than you know and more capable than you think! You are the sky, the earth and all that in between...you are the world. #woman #iammyownwoman #strength #happiness #back2basics #letscelebratelife

The BBC ! Bosu bicep curl Stabilize the bosuball with your core as you do your bicep curls. Integrated functional exercise that works on your #core #glutes #arms #biceps #corestrength #back2basics #functionaltraining #bosuball #bosu_fitness #coretraining

High intensity training has various forms. I did a simple pyramid set ascending as well as descending set of 1) 5 push ups 2) 10 side lunges 3) 15 high knee elbow 4) 20 windmills 5) 25 mountain climbers. Uffffff...exhausting but what a high!!! That means you do 1 then 1+2 then 1+2+3 then 1+2+3+4 and then 1+2+3+4+5 each combo with a 30sec break and then 3minute rest and then descend. Video is sped up 2x #back2basics #workoutmotivation #mondaymotivation #trainhard #domorebemore #functionaltraining #killingit #justdoit #workoutmode #beattheblues

Meanwhile, Bhagyashree is also busy meeting friends, partying with husband Himalay Dassani and attending events. She was recently in Jaipur at the inauguration of the International Festival Of Short Film.

At the inauguration of the International festival of short films held in #jaipur #rajasthan #filmfestival #rajasthantourism https://youtu.be/VVV72Uk4GjE

She also posted a romantic picture with husband Himalay and wrote, "Making a lifetime of moments."

Bhagyashree is making a comeback with the Telugu remake of Arjun Kapoor and Alia Bhatt's 2 States. TOI reports that she'll reprise Revathy's role in the film.

Promoted
Listen to the latest songs, only on JioSaavn.com
Last year, Bhagyashree, via a Facebook post for Humans Of Bombay, opened up for not signing films after Maine Pyar Kiya's success. "Maine Pyaar Kiya went on to become such a big hit, but I was a woman so in love with my husband and my son Abhimanyu who was born soon after that I said no to every offer I got. I have absolutely no regrets though," she said.


Bhagyashree and Himalay's son Abhimanyu is expected to make his Bollywood debut soon. The project will reportedly be backed by Anurag Kashyap's Phantom Films. The couple married in 1990 and also have a daughter Avantika.
Comments
bhagyashreeMaine Pyar Kiyabhagyashree pics