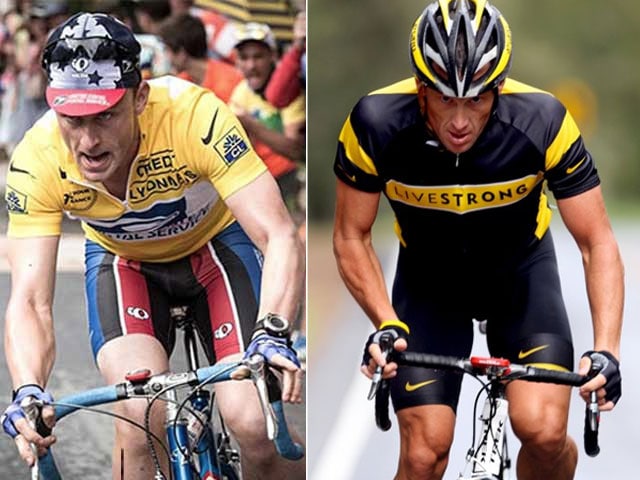 (Left) Ben Foster in a still from The Program. This image on right was posted on Facebook by Lance Armstrong

New Delhi: Actor Ben Foster just took method acting to a whole new level while admitting in a recent interview that he used drugs to play disgraced American cyclist Lance Armstrong in the upcoming movie The Program. In an interview to The Guardian, Ben admitted to using performance-enhancing drugs in order to get into the skin of his character and confessed that it came with the cost of 'losing his marbles.'

Ben, 34, is quoted as having said, "There's a fallout. Doping affects your mind. It doesn't make you feel high. There are behaviours when you've got those chemicals running through your body that serve you on the bike but which, when you're not."

"I don't know how to separate the chemical influence from the psychological attachment I had to the character. If it's working, it keeps you up at night. This is losing your marbles, right?," Ben told The Guardian. Ben Foster had mixed views on Lance Armstrong, who beat cancer to win the Tour De France seven consecutive years but was stripped of his titles after allegations of doping culminated in a guilty verdict from authorities in 2012.

In the interview, Ben says, "On one hand, he's a lying doper who tricked the world. On the other, he's a young man who faced cancer. It changes you. And when you go to war it changes you. That's what Lance did - he went to war with his body. That shifts your consciousness.

"He's a smart man. He says, 'I can do some good with this.' He raised half a billion for cancer research. We just don't like him because he was Jesus Christ on a bicycle. We're mad he came back from the dead, saved the sick and then turned out to be full of shit. And we're punishing him because he didn't apologise in the way we'd like. Americans love a good apology. He wouldn't do that."

Meanwhile, Ben Foster's co-star Chris O'Dowd has given him the thumbs-up.

The actor plays Irish journalist David Walsh, who spent 13 years uncovering Armstrong's dependence on steroids, in The Program and told BBC that it was necessary to take drugs for a realistic portrayal of the effects of drug use.

"I think that's a really smart thing and makes sense. I think if you have to take drugs in a role, it's very hard to do without taking the drug at some stage in your life," he said.

Directed by Stephen Frears, The Program also co-stars Dustin Hoffman, Lee Pace and Jesse Plemons. The film is scheduled for release in October this year.