"Moments like these make memories for life," wrote Vaani Kapoor 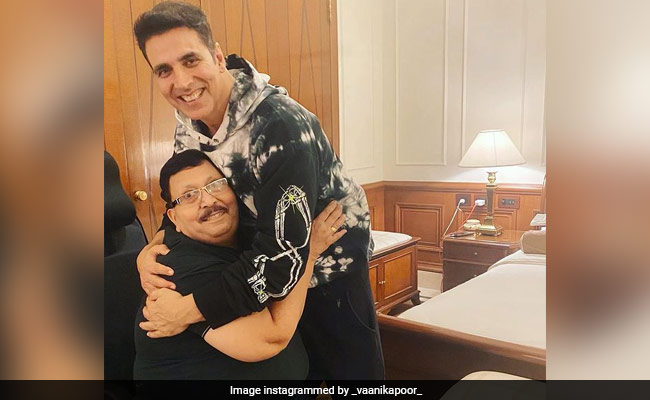 For Vaani Kapoor, her Bell Bottom co-star Akshay Kumar is "a true gem." Why, you ask? Well, the actress' father Shiv Kapoor had his fanboy moment with Akshay Kumar on Tuesday, when the actor and his co-stars arrived in Delhi for the trailer launch of Bell Bottom. Vaani has, in several previous interviews, stated that her father is a big fan of Akshay Kumar and that he was "ecstatic" when she had told him she will feature alongside the 53-year-old actor in a film. Now, on Tuesday night, Vaani Kapoor posted a picture of Akshay Kumar hugging her father and wrote: "Moments like these make memories for life...his heart is full...papa's fan moment. Akshay sir, you're a true gem."

Team Bell Bottom was in Delhi on Tuesday to launch the trailer of the film that will open in theatres on August 19. Akshay Kumar even shared an ROFL video featuring himself, Vaani Kapoor, Lara Dutta and Jackky Bhagnani having a whole lot of fun on their way to the trailer launch event. Check out the clip here:

Bell Bottom is a spy thriller, in which Akshay Kumar plays an undercover RAW agent, whose code name is Bell Bottom. In the film based on a true story, Akshay is assigned the mission of rescuing 210 hostages from a hijacked Indian plane in 1984.