"When it's been 6 years but she is still mad at you," Arjun Kapoor captioned the post 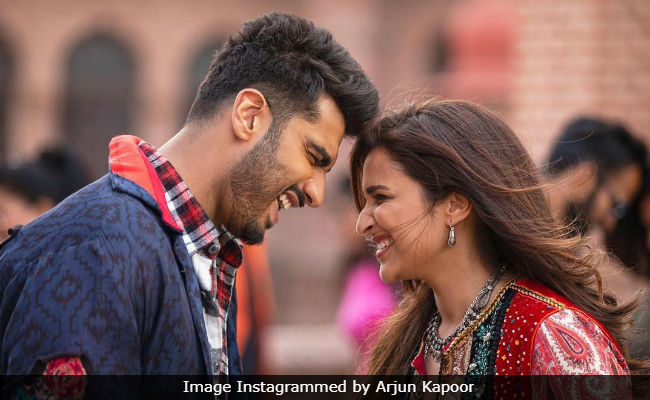 It is a well-known fact that Arjun Kapoor shares a great rapport with his Namaste England co-star Parineeti Chopra and the duo are often seen trolling each other on social media. This time it was Arjun's turn to lovingly troll the actress. On Wednesday, Arjun shared a meme of sorts, in which he juxtaposed a still of himself and Parineeti from Ishaqzaade, with a still from the song Bhare Bazaar. Interestingly, Parineeti seemed angry in the both the pictures. Now, Arjun described the picture with a ROFL caption and wrote: "When it's been 6 years but she is still mad at you."

Take a look at a screenshot of Arjun Kapoor's Instagram story here: 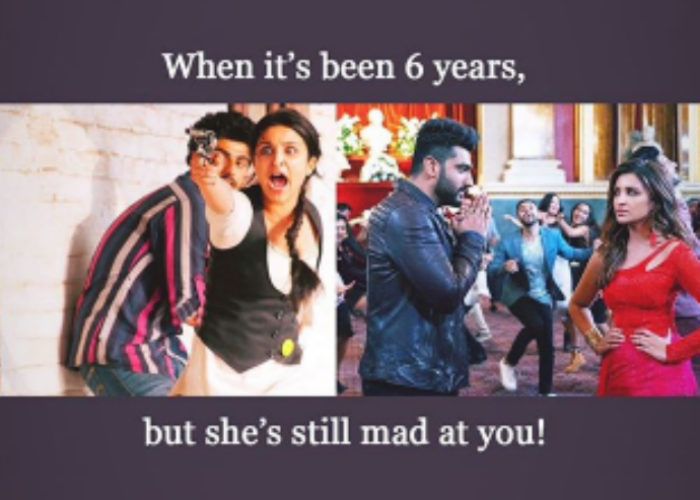 Arjun and Parineeti are often spotted on the trends list for trolling each other on social media. The duo trended big time after Parineeti trolled Arjun over a BTS video of them rehearsing a dance step for the song Bhare Bazaar. In the video, Arjun apparently forgot his dance steps. Parineeti took advantage of the situation and wrote: "Visual proof of me winning against Arjun Kapoor Baba, please stay on your mark! Thanking you, yours faithfully. Score - Parineeti: 1, Arjun: 0."

The duo trended a great deal after they featured together on the cover of a magazine together and their fans asked them to 'get married to each other.' Arjun's response was: "This chokra is jawaan and in no hurry to get married... Parineeti Chopra, please wait while I age gracefully and consider my options,"while Parineeti said, "Oh nooo! Sheeeeee! Arjun Kapoor, please excuse me I don't have dates... please contact my manager."

Absolutely thrilled for @arjunkapoor , who gets a chance to share a magazine cover with me! Hi baba how does it feel to achieve this milestone? #ParineetiPosesWithAFan #CareerHigh @bridestodayin @errikosandreouphoto

In an interview with news agency IANS earlier this year, Arjun Kapoor said that he enjoys working with Parineeti Chopra, so much so that he believes that she "brings the best out of him. Arjun told news agency IANS: "There is not a feeling of fear in me while working with Parineeti as I can tell her to improvise on a certain scene or ask her to do some more retakes together. There is no sense of insecurity among us in terms of outdoing each other."

Parineeti Chopra too shares a great equation with Arjun and shared a special post for him, in which she wrote: "I don't think I would have wanted to share this journey with anybody else but Arjun. He is my most compatible co-star, trustworthy mentor and honest friend."

As I stand at the eve of the trailer launch of arguably my biggest film, I cant help but feel a little emotional. This was a film I had dreamt of doing for a long time, and when I stood on the set in a traditional Indian outfit for the very first time, I felt like I was home. I dont think I would have wanted to share this journey with anybody else but Arjun. He is my most compatible co star, trustworthy mentor and honest friend. I can totally be myself and never have to apologise for it. Non judgemental and caring, Arjun has truly taught me how to handle this complex industry and business. He has the right to scream at me when I mess up, and vice versa. 3am friend? Totally. Everyone knows him for his intelligence and knowledge about this business, his witty humour but for me its his family values and beautiful upbringing that sets him apart as a person. I dont know if we realise it, we are same-same but different Thanks baba for being my bouncing board, my partner in crime and my true true true friend. Thankyou for understanding me even when I dont say anything! Thankyou for always listening, whether its my rubbish or my advice!! I hope this friendship continues forever, and also show in the beautiful love story we have made in Namaste England. No this is NOT a plug in for the film, this is an honest thank you note to my teacher, because baba you've truly taught me a lot (also because we will never say such nice things in person )! Love you! Now please RTGS 75 million my bank account by Monday thanks. @arjunkapoor

Arjun Kapoor and Parineeti Chopra are currently busy with the promotional duties of their upcoming film Namaste England, which is a sequel to the 2007 film Namastey London, which featured Katrina Kaif and Akshay Kumar in lead roles. Just like the first part, the second installment has also been directed by Vipul Amrutlal Shah.