Ant-Man And The Wasp Movie Review: Paul Rudd's film is merry and fleet, and no less enjoyable for being instantly forgettable. One of the nicest things about Ant-Man, the 2015 origin story of the eponymous Marvel superhero, was its modesty and congeniality: Sure, Guardians of the Galaxy had already come out, injecting welcome humor into a genre that had all but succumbed to self-seriousness and bellicosity. But as Guardians and later, Deadpool doubled down on the snark, Ant-Man kept things light, its playfulness made all the more endearing by the boyish, twinkle-eyed persona of its star, Paul Rudd.

Returning in the title role, Rudd brings those same exuberant values to bear on Ant-Man And The Wasp, which makes up in brio and adorability what it might lack in narrative complexity. As the movie opens, Rudd's "real-life" alter ego, Scott Lang, is finishing up his house arrest since the mayhem of Avengers: Civil War. With only three days to go, he spends his time fooling around on his drum machine, practicing card tricks and amusing his daughter, Cassie (Abby Ryder Fortson), by staging pretend heists with Rube Goldberg-like contraptions and props.

Ostensibly, Lang's past life of crime will now be erased by the domestic duties of a single dad and the security firm he runs with his former cellmate, Luis (Michael Pena). But before the LoJack comes off, he's drawn into another adventure with inventor Hank Pym (Michael Douglas), Pym's daughter, Hope (Evangeline Lilly), and Hope's long-lost mother, Janet, the Wasp in question who has been miniaturized and trapped for 30 years in the quantum realm, but who now might be capable of returning - with Ant-Man's help, of course. 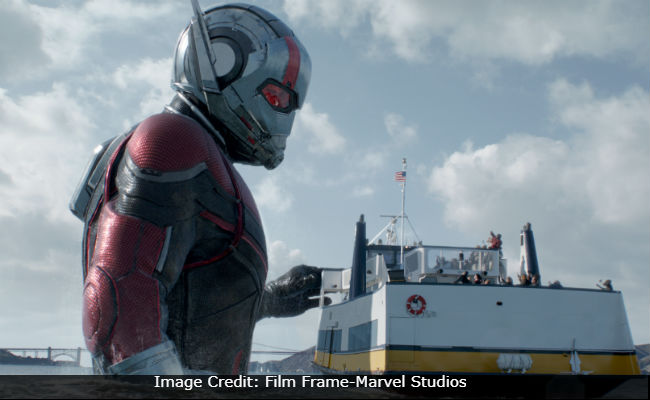 Ant Man And The Wasp Movie Review: Paul Rudd in a still from the film. Image Credit: Film Frame-Marvel Studios

The plot isn't the thing in Ant-Man And The Wasp, which distracts viewers with the usual gizmos that light up, whir, shrink-o-late and supersize with metronomic regularity, as well as a complement of credible bad guys, led by a toothy greed-head named Sonny Burch (Walton Goggins). The joys of the movie lie in its utterly gratuitous but amusing digressions, whether in the form of Rudd's constant stream of witty asides, Pena's motor-mouthed recollection of Lang's emotional journey under the influence of truth serum, running gags involving close-up magic, Morrissey and the Russian fairy tale figure Baba Yaga, or a hilarious sequence involving a tiny Lang wearing a lost-and-found sweatshirt in an elementary school that puts a similar sight gag in Deadpool 2 to shame.

Much of Ant-Man And The Wasp feels like filler, especially when the fight between the forces of good and evil is triangulated by characters played by Laurence Fishburne and Hannah John-Kamen, who plays a shape-shifting wraith called the Ghost in a performance resembling Elsa Lanchester crossed with Alanis Morissette. Everyone gets their arc in a movie that feels less urgently necessary than shruggingly self-accepting: An early chase scene through a restaurant kitchen (watch out for that knife!), a pursuit later on in vehicles constantly changing from Matchbox to full-size (including a flatbed truck used as a scooter) and an entire building reduced to the equivalent of a carry-on bag dutifully reward viewers interested in Honey-I-Shrunk-Paul-Rudd antics and spectacle.

Directed by Peyton Reed from a script by Rudd and a raft of co-writers, Ant-Man And The Wasp serves its purpose with a characteristically sunny disposition and occasional flair, situating its various heroes, villains and sidekicks for future installments and moving the Marvel behemoth ever forward. Amid a story that seemingly will never end, Rudd brings warmth and modest good humor to one of its most ingratiating and sweet-natured chapters.

Ant-Man And The Wasp is merry and fleet, and no less enjoyable for being instantly forgettable. The buzz might be temporary, but it's fun while it lasts.