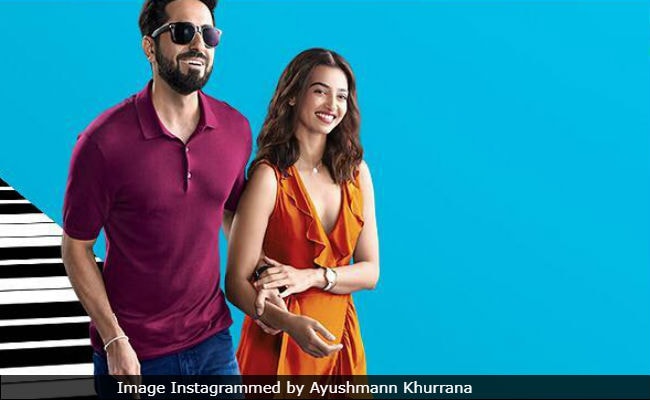 Actor Ayushmann Khurrana, who plays the lead role in AndhaDhun, shared a new poster of the film on Tuesday afternoon, along with the reminder that the film's trailer is out. The new poster features the film's lead pair Ayushmann and Radhika Apte. Ayushmann, who plays the role of a visually impaired pianist in the film, can be seen walking with a stick and wearing sunglasses, while Radhika Apte can be seen dressed in an orange dress and holding Ayushmann's arms. The poster features a piano juxtaposed against a bright blue backdrop and a cat in the foreground. Sharing the film's poster on different social media platforms, Ayushmann wrote: "He stumbled upon love. She fell in it. What does fate have in store for them? Watch AndhaDhun in cinemas on October 5 to know. Trailer Out Now!"

The makers of the film, released the trailer of AndhaDhun on Sunday. The trailer went crazy viral and it has over 12 million views on YouTube as of now. The trailer received over 10 million likes within a day of its release. Ayushmann and Radhika shared a poster on Instagram, that read "10 million views" and wrote: "People have gone AndhaDhun after watching the trailer. Have you watched it yet?"

Check out the trailer of AndhaDhun here:

AndhaDhunhas been directed by Sriram Raghavan, apart from Ayushmann and Radhika, the film also features veteran actress Tabu. The mystery-drama has been collaboratively produced by Viacom 18 Motion Pictures and Matchbox Pictures. AndhaDhun is slated to release on October 5.