Amrita Rao, Dreaming Of The Beach, Posts This Throwback Clip From Thailand Vacation

The actress posted a throwback video of her holiday in Thailand. 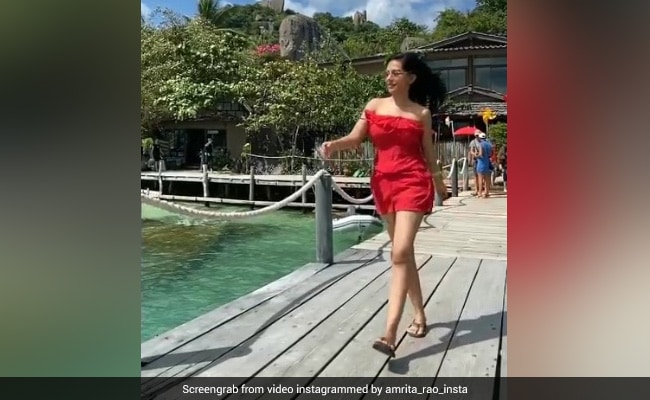 The pandemic has altered our lives extensively by ushering in a new normal where going away on fun holidays is quite the distant dream. And it seems like we aren't the only ones feeling the pandemic blues. Actress Amrita Rao posted a throwback video on her Instagram from her vacation in Thailand. In the video, the actress is seen dressed in a red romper walking along a pier on a gorgeous island in Thailand. Sharing the fun video, she added an equally relatable caption. She wrote, "Mentally I'm here. There is a filmy in ALL of Us ..Bring it out this Thirst'DaY.”

The actress added the song Dynamite by the popular K-pop band BTS in the background as she twirled around in a typically filmy fashion. Also don't miss her hashtag referencing the jal lijiye memes that went viral on social media a few days ago. The memes were inspired by a dialogue of the actress' from her hit film Vivah.

Amrita Rao is evidently missing her fun vacations and honestly, we can relate. However, the actress has on several occasions managed to cheer us out of our lockdown-induced boredom with her posts on Instagram often featuring her husband Anmol and their cute son Veer.

For instance, Amrita posted an adorable Instagram Reels of herself and her baby boy on Mothers Day. In the video, Amrita is seen speaking gibberish that makes her son laugh with glee. The cute video captioned, “Story of Kuchoo and Puchoo. Love is the only language that touches the heart. A Big Salute to every Mother on Mother's Day,” made us smile.

Earlier, Amrita had shared another Instagram Reels of her husband attempting to do the Don't Rush Challenge. But instead of doing the steps of the dance routine, he is seen taking care of their son. In the video, her husband is performing his daddy duties of bathing and dressing Veer before putting him to bed. Amrita captioned the video, “ With Veer around, you don't ever say 'Don't Rush'. A hands-on mom is nothing without a hands-on papa.”

Amrita Rao married her boyfriend RJ Anmol in 2016 after dating for several years. The couple welcomed their son in November last year. The actress was last seen in Thackeray starring Nawazuddin Siddiqui in the titular role in 2019.