Ammonite Review: Kate Winslet fleshes out the character with striking empathy and exactitude, Saoirse Ronan serves as the ideal foil. 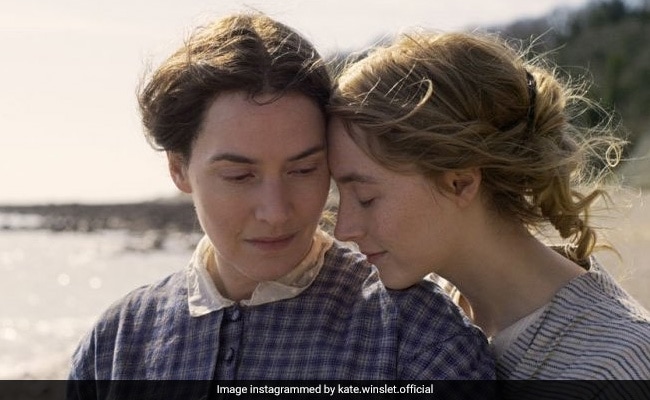 Francis Lee's second directorial venture Ammonite plays out in bleak, monotonous locales. The grey, cheerless hues reflect the dour routine of the life of one of the film's two protagonists, Mary Anning, whose visage is nearly always distant, impenetrable and immutable. Anning - Kate Winslet fleshes out the character with striking empathy and exactitude - was a 19th century English paleontologist who spent her life prowling the fossil beds and cliffs along the English Channel in Lyme Regis, Dorset, ferreting for clues to the history of the Earth in the rocks and stones on the seashore.

Fossil hunting was Mary Anning's primary calling, one which earned her worldwide fame, if not money and recognition from the contemporary scientific community. From a shop in her home, she also sold her seaside finds, besides curios that she made from cowrie shells to tourists to supplement her income.

The core of the story that writer-director Lee tells is fictionalised. It revolves around Mary's relationship with Charlotte Murchison, a frail young woman who is left in her charge by the latter's geologist-husband when he undertakes a tour of the continent. Charlotte is portrayed by Saoirse Ronan who, notwithstanding the somewhat sketchy character detailing that she has to deal with, serves as the ideal foil - brittle and prone to sharp mood swings - to Winslet's cold and calcified Mary.

A lesbian romance set in the 1840s, Ammonite, which releases on BookMyShow Stream today, is studded with vivid period details that are spelled out with an evolved sense of place, time and dramatic purpose. The rainy, windy winter-time coast where the fossilised remains of primeval times are exposed by landslides is Mary's hunting ground, the only place where she appears to come alive.

The physical passion between two mismatched women - Mary and Charlotte belong to completely different worlds, a fact that sparks both attraction and friction - is revealed along a gentle, unhurried gradient in sharp contrast to how Lee presented the eruption of gay love in his first film, God's Own Country. The 2017 film revolved around a sheep farmer in west Yorkshire and his relationship with a Romanian migrant worker.

The actor who played the outsider in God's Own Country - Bucharest-based Alec Secareanu - has a supporting role in Ammonite, as does Gemma Jones, who was cast as the sheep farmer's grandmother in the earlier film. Here, the veteran actress effortlessly slips into the role of Molly, Mary's ailing mother whose day begins and ends with cleaning and meticulously arranging the animal figurines that she is fiercely possessive about. These porcelain pieces, as is revealed later in the film, are linked inextricably to her and Mary's rough past.

Charlotte's husband, London scientist Roderick Murchison (James McArdle), arrives in Mary's shop one day and announces how much in awe of her work and reputation he is. The man not only offers to buy the ammonite that she has just brought back from the seacoast, but he also requests her to let him accompany her to the shore the next morning so that he can learn from the best in the business.

Mary and Charlotte, however, start off on the wrong foot. The former grudgingly agrees - the money that Roderick offers for the job helps her make up her mind - to take care of the convalescing woman who has been advised restorative baths in the ocean. She begins to tag along with Mary on her outings to the sea. Eventually Charlotte, slowly but steadily, unlocks a part of Mary's mordant heart.

A splash in the sea leaves Charlotte terribly unwell. Dr Liebersen (Secareanu) advises that she be moved out of the hotel and into Mary's home. Mary is reluctant. The doctor responds in a manner one would expect of a mid-19th medicine man. He says: "It is a woman's position to care for a fellow sister, is it not?" Yet again, Mary gives in.

As the ice begins to break between the two women, it becomes obvious that Charlotte is absolutely hopeless with household chores. But she reveals a special talent in the work of deciphering the fossils. With a bit of help from her reluctant caregiver, she even manages to make a mirror frame with seashells. The bonding between the two - one has no social life at all, the other is weighed down by an ineffable sadness - is gradually cemented.

The initial unevenness gives way to tenderness as Mary and Charlotte discover that they aren't like the fossils that they work with. They, too, have beating hearts. Mary's reveals itself most dramatically when she and Charlotte, on Dr Liebersen's invitation, attend a recital. Mary sits all by herself while Charlotte mixes with ease with the concert audience. The older woman is assailed by jealousy.

The two women live in an era in which child mortality and miscarriages are very common - indeed, there is an early suggestion, it is only a suggestion mind you, that Charlotte has lost a baby in her womb, which might have triggered her current timid state of mind. Mary, on her part, says to Charlotte: "I have my work. I don't need children as well."

"I want my bright, funny, clever wife back," Roderick says before he entrusts Charlotte to Mary. Charlotte does make a return to the fullness of life but she does so in circumstances that the husband would never have anticipated. The dreariness around Mary and Charlotte's lives lifts nd gives the two women a reason to look forward to the future, no matter how uncertain.

Filmed in the main in subdued natural light by cinematographer Stephane Fontaine, Ammonite isn't a pretty film in the conventional sense. The aching, artful beauty of Celine Sciamma's Portrait of a Lady on Fire, with which this film bound to be compared, isn't what Lee aspires to. Ammonite has a dim, grey, occasionally sterile, feel, but embedded in its dullness are flashes of poetry and a lament for what women had to endure for breaking the mould and challenging male-dominated domains, a fact that stands out in bold relief in the British Museum.

Mary enters the imposing building to have a look at one of her own fossils that is on display in a large glass case. The walls of the museum are plastered with portraits of men. The visitors, too, are all men. That was what Mary Anning was up against.

Ammonite takes liberties with facts to bring the fossil hunter's epochal story to the screen, but it does not fail to fully tap its innate emotional force. Lee's quietly immersive sophomore effort reconfirms his skills as a storyteller and a craftsman. His grasp on the medium and Kate Winslet's unblemished performance make Ammonite a treat to watch.