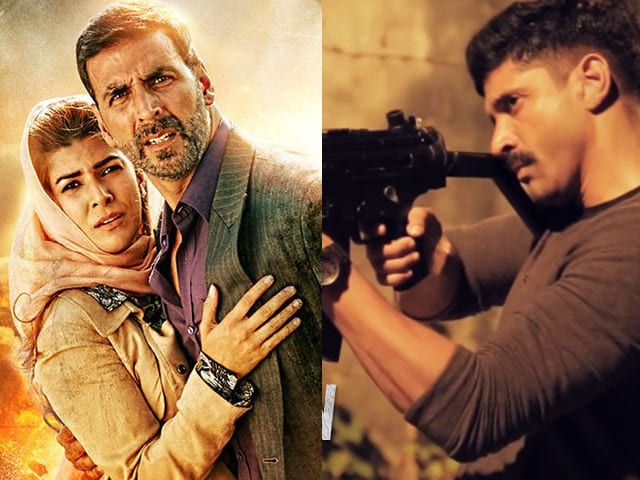 A still from Airlift (left) and Wazir (right).

Mumbai: For the first time in many years, Bollywood will witness some big ticket releases with huge star-power all in the month of January, generally considered a 'jinx' for the industry.

From megastar Amitabh Bachchan, action hero Sunny Deol, superstar Akshay Kumar to filmmaker Rajkumar Hirani, all are set to release their films in the first month of 2016, leading to many clashes at the box office.

The year will begin with Wazir, starring Amitabh Bachchan and actor Farhan Akhtar. The high voltage drama-thriller is produced by filmmaker Vidhu Vinod Chopra and made by Shaitan director Bejoy Nambiar. (Also Read: Neil Nitin Mukesh Says Wazir Was Renamed Because of His Performance)

Wazir will clash with the social-drama Chauranga, produced by Onir and starring actor Sanjay Suri and Tannishtha Chatterjee.

It will be followed by Ghayal Once Again, releasing on January 15, which has been directed, written and produced by Sunny Deol. It is the sequel to the 1990 super-hit action drama Ghayal and will mark Sunny's comeback. (Also Read: Sunny Deol Upset Over Catfights Between Ghayal Once Again Actresses?)

The date will also mark the return of actress Juhi Chawla, who will make a comeback after two years with Chalk n Duster. The film, which brings life of two teachers, also stars veteran actress Shabana Azmi, Zarina Wahab and Divya Dutta.

The Friday post these two films will witness another clash at the box office with Akshay's Airlift and the adult comedy Kyaa Kool Hai Hum 3, releasing on January 22. Based on the evacuation of Indians based in Kuwait during the Iraq-Kuwait war, Airlift marks Akshay's second consecutive release in January after his last year's espionage-drama Baby, while Kyaa Kool Hai Hum 3 is the third instalment in the hugely popular adult-comedy series of the same name. (Also Read: Akshay Kumar's Airlift Will Make You 'Proud to be Indian')

The month will end with yet another adult-comedy clashing with a big-star film. Sunny Leone's Madtizaade and R Madhavan's Saala Khadoos will release on January 29. (Also Read: Censors Didn't Cut a Single Scene in Mastizaade, Says Director)

The year 2015 saw many releases in January too, from Arjun Kapoor's Tevar, Bipasha Basu's Alone to Ayushmann Khurrana's Hawaizaada. But only Baby was successful.

In the past, few films have worked at the box office during January, which is considered a dull period, as moviegoers are still in the holiday mood.

In January 2014, it was only superstar Salman Khan's Jai Ho that worked decently at the box office and was the solo big release.

While in 2013 it was Race 2 which was successful among other releases like Matru Ki Bijlee Ka Mandola, Inkaar and Akaash Vani.

With January 2016 offering an attractive line up of films for the audiences, it will be interesting to see if the star-studded month can finally break the jinx and deliver good at the box office.