John Abraham said that the movies belong to different genres and hence, the clash will hardly be a problem 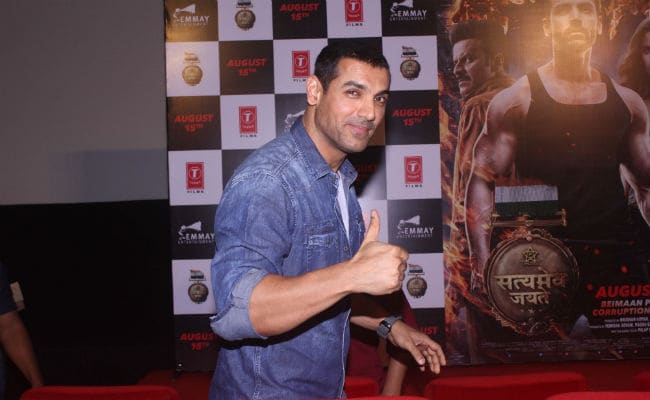 John Abraham at the trailer launch of Satyamev Jayate trailer

This Independence Day, we are to witness the clash of John Abraham's Satyamev Jayate and Akshay Kumar's Gold at the box office. John Abraham, who launched the trailer of his upcoming film with Manoj Bajpayee on Thursday, said that the movies belong to different genres hence, the clash will hardly be a problem, reported news agency PTI. "Akshay is a friend, I wish him the best. Two films can release on the same day as both the films are of different genres," John Abraham told PTI. John's comment comes a month after he refuted rumours that things are not quite alright between John and Akshay.

Here's what he tweeted in May:

John had also addressed the upcoming box office clash between his film and Akshay's in a previous interview to IANS and said: " "Akshay is an actor in Gold and I am an actor in Satyamev Jayate. It's a producer's decision from both sides. It is about Excel Entertainment and T-Series, so I have no say in that at all. As far as competing with Akshay is concerned, I want to make it clear that he is my senior in the industry." He added: "I love him and I have always wished the best for him and I am sure he also wants best for me.""

Director Milap Zaveri, who was also present at the trailer launch event, said that the film will be unlike any other movies based on the plot of patriotism and corruption and will imbibe elements which have not been witnessed before. "We have spoken about patriotism, corruption. This is an unfiltered commercial film. It has everything from drama to action," Milap Zaveri said.

In Gold, Akshay Kumar plays the role of a Bengali hockey coach who wants to form a team to fetch gold at the Olympics for India but as a free nation. The film is being directed by Reema Kagti and will also star Mouni Roy, Kunal Kapoor and Amit Sadh.

John Abraham, on why he chose to do Satyamev Jayate, said: "It depends on what you want to do at that point of time. Each actor is entitled to choose what they want to do next. Akshay is doing a comedy film next." John Abraham and Akshay Kumar have earlier worked together in films like Garam Masala, Desi Boys and Housefull 2.

Satyamev Jayate is John Abraham's second release this year. John kick-started the year with the release of Parmanu: The Story Of Pokharan. The aforementioned film is based on the 1998 Pokhran nuclear tests. "I do films that I like in terms of script. I enjoyed making Parmanu and I like this space. I am doing RAW and then I have Batla House."