The makers of the movie shared a brand new teaser, featuring not only Akshay Kumar but also Ajay Devgn and Ranveer Singh, who too have cameos in Sooryavanshi. 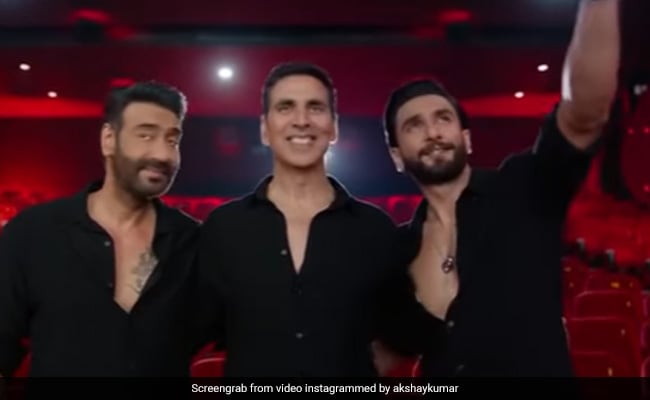 Ranveer Devgn and Ajay Devgn have cameos in Sooryavanshi

This Diwali, be ready for a blockbuster dhamaka at the cinemas, because Sooryavanshi. On Friday morning, Akshay Kumar finally made the big announcement about Sooryavanshi's release date. The Rohit Shetty directed cop drama will now release on November 5 in theatres - a day after Diwali. The makers of the movie shared a brand new teaser, featuring not only Akshay Kumar but also Ajay Devgn and Ranveer Singh, who too have cameos in Sooryavanshi. For the uninitiated, both Ajay and Ranveer have headlined cop movies directed by Rohit Shetty. In his tweet, Akshay Kumar wrote: "Interval hua khatam (interval is over), now it's showtime! Sooryavanshi releasing this Diwali, November 5 at a cinema near you. Come celebrate with us."

Interval hua khatam, now it's showtime! #Sooryavanshi releasing this Diwali, 5th November at a cinema near you. Come celebrate with us. #BackToCinemaspic.twitter.com/JF2QE80Efp

Meanwhile, Katrina Kaif, who co-stars with Akshay Kumar in Sooryavanshi, wrote a lengthy note about film making a comeback in theatres: "18 months have passed since our entire entertainment industry including film and stage has been on a standstill due to the pandemic. It's been a long difficult wait for us but finally patience prevailed and we are back! Now it's not about just our film but it's about our industry as a family and the relationship we share with our beloved audience!"

Last month, Akshay Kumar confirmed that Sooryavanshi will be released sometime soon - his announcement followed Chief Minister Uddhav Thackeray's statement that all cinema halls in Maharashtra will be allowed to open after October 22.

Sooryavanshi is among the movies, which have opted for a theatrical release instead of digital streaming, and hence been rescheduled several times owing to the pandemic situation. In 2020, shoots and productions were halted in mid-March due to the first wave of the COVID-19 pandemic. However, in the months of October and November, shooting schedules were allowed to resume. As the second wave of the pandemic hit the country in April, a lockdown was imposed yet again, leaving distributors and cinemas affected. As lockdown restrictions began to ease, several states allowed cinema halls to operate. But Maharashtra, a key hub for Bollywood movies, continued the shut-down on cinemas until October this year.

With its Diwali release, Sooryavanshi will have a box office collision with Marvel Studios' Eternals, which is slated to release on November 5. Sooryavanshi will mark Bollywood's first big budget film to open in cinemas since the lockdown.