Can you spot Riteish Deshmukh in this picture shared by Ajay Devgn? 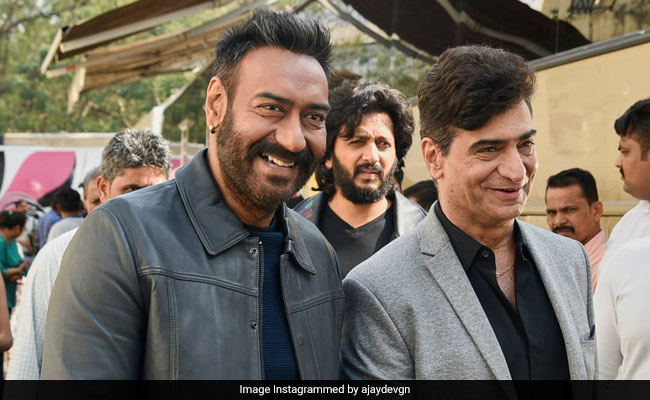 Ajay Devgn's latest Instagram post cracked up the Internet and we are not surprised at all. On Wednesday evening, Ajay Devgn shared a picture of himself along with the film's director Indra Kumar, from the sets of his upcoming film Total Dhamaal. In the picture, the duo can be seen happily posing for the camera. BTW, did we tell you that Ajay's Total Dhamaal co-star Riteish Deshmukh accidentally photo bombed the picture. Ajay subtly hinted towards Riteish's bearded look and referred to him as a "daadhi wala baba." Ajay captioned his post: "Peechhe ye daadhi wala baba kaun hai?" Riteish hasn't reacted to Ajay's post but we are eagerly waiting for his response. Ajay's post received over 1 lakh likes within a few hours.

Total Dhamaal is the third installment of the Dhamaal series. Ajay Devgn, Anil Kpoor, Madhuri Dixit and Boman Irani are the latest additions to the film's cast, while Riteish Deshmukh, Arshad Warsi and Javed Jaffrey have reprised their roles. Total Dhamaal was initially scheduled to release in December but had to be postponed because of post-editing procedures. Total Dhamaal will hit the screens on February 22.

The trailer of Total Dhamaal released a week ago and it went insanely viral. The trailer has over 43 million views on YouTube as of now. Check out the trailer here: