After 34 Years, Liam Neeson And Helen Mirren Admit To Their 'Relationship.' Watch Video

Helen Mirren on Liam Neeson, "We were a serious item for a while. Lucky me!" 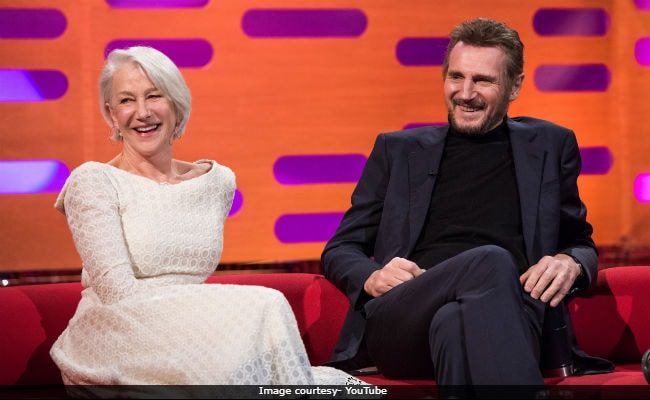 New Delhi: Two of the greatest acting legends of Hollywood - Dame Helen Mirren and Liam Neeson - admitted that they just didn't date back in the 80s, but 'lived together for almost four years,' before they broke-up. The duo made a public appearance together after almost 34 years on television for The Graham Norton Show. They were also joined by Fifty Shades of Grey actor Jamie Dornan. In a video published by The Graham Norton Show on YouTube, Liam Neeson recalls the moment he fell in love with Helen Mirren. Liam Neeson, 65, says, "I remember being on the set and standing with Ciaran Hinds as Helen walked towards us dressed in her full Morgana le Fay costume, and we both went, I think Ciaran was too, but I was very smitten." This candid confession left Helen Mirren, 72, blushing as she quipped, "I never knew that. You've never told me that before. It's amazing." Excalibur (1981), directed by John Boorman had Mirren playing the powerful enchantress Morgana Le Fay, while Neeson played the role of Sir Gawain.

Their fondness for each other on show was hard to ignore, while host Graham Norton was quizzing them about their secret dating days. Helen Mirren didn't just correct him for the term 'dating', but went up to admitting their serious relationship that last four years, she said, "We were a serious item for a while. Lucky me!"

Liam Neeson added, "Before I met her and we worked together, I had read somewhere that if she fancied a guy she would imitate his walk behind his back, and I turned around one day and she was doing that to me."


Promoted
Listen to the latest songs, only on JioSaavn.com
Back in 1980, while filming Excalibur, both Liam Neeson and Dame Helen Mirren were rumoured to be dating. However, none of them ever acknowledged a romance, until in an interview to James Lipton for Inside the Actors Studio, Liam Neeson revealed that she helped him in shaping his career.

Liam Neeson was married to Natasha Richardson, his co-star of the 1993 play Anna Christie while Helen Mirren is currently married to American director Taylor Hackford.