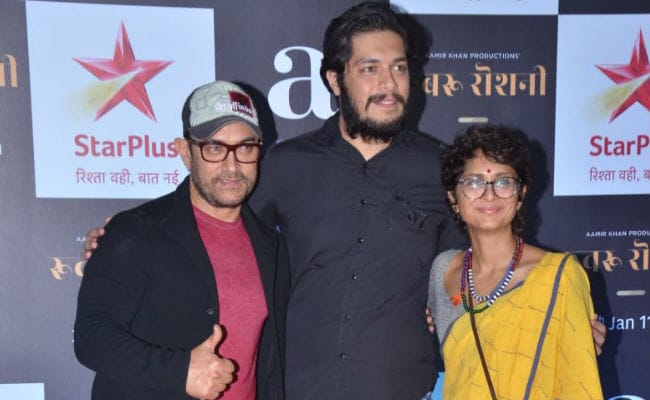 Aamir Khan and Kiran Rao with Junaid at a special screening of Rubaru Roshni.

Actor Aamir Khan's son Junaid is a theatre artiste looking for his Bollywood break but Aamir said that Junaid will first have to pass a screen test to sign a film, reports news agency PTI. "We are looking for Junaid. I've seen his work and I'm quite happy with it. When we will get the right kind of story... I believe in screen tests so he has to pass the test. If he does a good test, he'll be in the film. If not, he won't be," Aamir Khan told a group of reports at a recent event in Mumbai. Junaid trained as a theatre actor in the American Academy of Dramatic Arts in Los Angeles for two years. Junaid featured in several plays for over a year and he has also assisted his father in some of his projects.

Speaking of the kind of films he wants for Junaid, Aamir Khan said: "He has been in theatre for three years now. I would like to see him as a lead actor who plays characters, because I've always believed in that. You should always be playing characters and not hero. There's a difference. I've always felt happy that whenever my films come out, people call me by my characters name. That tells me my work has really hit home," Aamir Khan said.

Junaid and Ira are Aamir's children with his first wife Reena Dutta while he is now married to filmmaker Kiran Rao and they are parents to seven-year-old son Azad.