5 Things We Learnt About Beyonce From Homecoming: Difficult Pregnancy To Super-Strict Diet

The Netflix film documents the singer's celebrated performance at the 2018 Coachella festival - and the grueling prep it took to get there. 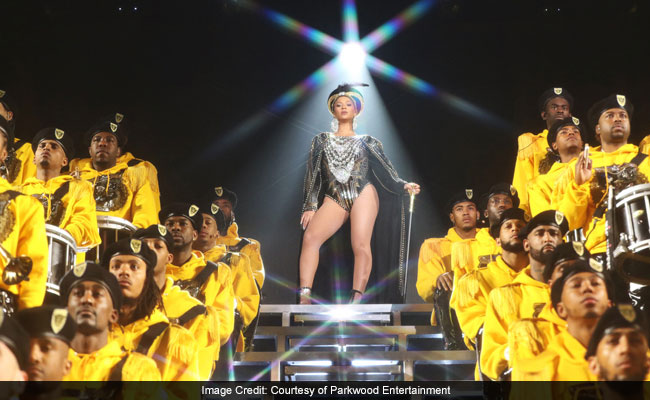 Beyonce in a still from Netflix's Homecoming. (Courtesy of Parkwood Entertainment)

Contrary to reports, Beyonce did not wake up like this - it took grueling work.

The entertainer documents that work in Netflix's Homecoming, a feature-length film released Wednesday that takes a look at the days leading up to her flawless and heartfelt performance at the 2018 Coachella festival.

Beyonce became the first black woman to headline the event, which has been held annually in Indio, California, since 2001 (after launching in 1999). Her triumphant performance marked her return to the spotlight after giving birth to twins Rumi and Sir Carter in June 2017.

Both milestones lent important themes to the performance, dubbed Beychella. Here are 5 things we learned from the documentary that took us behind the scenes.

-Beyonce was still rebounding from a difficult pregnancy when she began rehearsing for Beychella.

"It's my first time coming home, on the stage, after giving birth," Beyonce tells us. "I'm creating my own homecoming. And it's hard."

The singer first opened up about her difficult pregnancy in an essay for Vogue last year. She had high blood pressure and preeclampsia, a dangerous and potentially deadly pregnancy complication that led to her and Jay-Z's babies being born by emergency C-section. The situation was dire, she reveals in Homecoming, as one of the twins' heartbeats had paused a few times in the womb.

And like a growing number of celebrity moms, Beyonce talks about the emotional toll that pregnancy and childbirth can have on women. "A lot of the choreography is about feeling, so it's not as technical," she says 115 days ahead of her history-making performance. "It's your own personality that brings it to life. And that's hard when you don't feel like yourself."

-Her rehearsals, and preperformance diet, were no joke.

"This is grounding. Like no matter who you are, you get in here and it's real," Beyonce says after taking in a particularly difficult round of choreography. "That's why people don't like to rehearse. You gotta be humble. You gotta be willing to look awkward and you gotta study, be a student."

In an early rehearsal scene, it's revealed that the singer was stacking SoulCycle classes on top of her demanding rehearsal schedule.

In Vogue, Beyonce wrote that during her recovery, she focused on "self-love and self-care" and that she "embraced being curvier." But after six months, she "became vegan temporarily, gave up coffee, alcohol, and all fruit drinks."

Homecoming delves into her strict diet. "In order to meet my goal, I'm limiting myself to no bread, no carbs, no sugar, no dairy, no meat, no fish, no alcohol," explains the singer, who created a meal delivery service around her intermittent forays into veganism. "And I'm hungry."

Thirty-three days ahead of Beychella, the singer celebrates "a huge, huge accomplishment" - getting into her old costume, a sparkly rose gold number she wore on her "Formation" tour. "I'm actually in it and I can move," she says. "I still have a ways to go, but this makes me feel good 'cause I've been sacrificing and working hard."

She FaceTimes her husband to share the news. "All right!" Jay-Z says. ("Why aren't guys as excited?" one woman asks as Beyonce offers an exasperated look to which we can relate.).

The documentary cuts to her performing "Flawless."

"Change the game with that digital drop / know where you were when that digital popped / I stop the world," she sings, reminding us that she pioneered the secret overnight album drop.

Homecoming's debut on Netflix also coincided with a surprise album release that features 40 (yes, 40) tracks. Unlike several of her most recent albums, Homecoming Live is available across all streaming platforms, not just Tidal, the service owned by Jay-Z.

-Her children were a part of the journey to Beychella.

Amid the glitz and the glam, Homecoming builds an intimate portrait of what it's like to be a working mom. "Just trying to figure out how to balance being the mother of a 6-year-old and of twins that need me and giving myself creatively and, um, physically, it's a lot to juggle," Beyonce confesses.

The singer recalls breast-feeding the twins in between rehearsals and says she had her children with her whenever she could. One sweet moment features Beyonce grinning from ear to ear as she takes Rumi and Sir into her arms during a break.

Another, documented in the film's trailer, finds the singer's oldest daughter, Blue Ivy, demonstrating a choreography move. "You have to get three turns," she says. Blue, now 7, is also featured on the Homecoming Live album, singing Lift Every Voice and Sing. ("Beautiful job, Baba," her proud mom says at the end.)

"I feel like I'm just a new woman, in a new chapter of my life and I'm not even trying to be who I was," Beyonce says. "It's just so beautiful that children do that to you."

But she also struggled with being away from her kids.

"In the beginning, it was so many muscle spasms and just internally, my body was not connected. My mind was not there," Beyonce says. "My mind wanted to be with my children. What people don't see is the sacrifice."

Homecoming succeeds in showing at least some of that sacrifice. "I definitely pushed myself further than I knew I could. And I've learned a very valuable lesson. I will never," Beyonce says laughing, "never push myself that far again."

-Beyonce (and her collaborators) had a deep appreciation for what it meant to be the first black woman to headline Coachella.

"It's hard to believe that after all these years, I was the first African American woman to headline Coachella," Beyonce says. "It was important to me that everyone that had never seen themselves represented felt like they were on that stage with us."

"To do this and have the Pan and the sororities and things that black families value up on a stage for the world to see and understand us a little bit more, it's just all a blessing," dancer-choreographer Edidiong Emah says in the film. Emah, who was born in Nigeria and grew up in Atlanta, has a family connection to Morehouse and Spelman, two renowned HBCUs.

In a title card ahead of the documentary's credits, Beyonce notes that "so many people who are culturally aware and intellectually sound are graduates of" HBCUs - a group that includes her father, an alum of Fisk University in Nashville. "There is something incredibly important about the HBCU experience that must be celebrated and protected."

Beychella was also a profound celebration of black womanhood, a theme the entertainer reflects on in a voice-over in the film:

"As a black woman, I used to feel like the world wanted me to stay in my little box. And black women often feel underestimated. I wanted us to be proud of not only the show, but the process and proud of the struggle. Thankful for the beauty that comes with a painful history and rejoice in the pain. Rejoice in the imperfections and the wrongs that are so damn right. And I wanted everyone to feel grateful for their curves, their sass, their honesty. Thankful for their freedom. It was no rules and we were able to create a free, safe space where none of us were marginalized."

-No (we repeat, no) detail was left to chance.

This won't come as a surprise if you're familiar with Beyonce's work and/or if you've seen various YouTube videos documenting her "bossiest moments." (No such video exists for Jay-Z, hmmm). But Beyonce notes in Homecoming that she had a hand in every aspect of her performance.

That meant that she "personally selected each dancer, every light, the material on the steps, the height of the pyramid, the shape of the pyramid, every patch was hand-sewn. Every tiny detail had an intention."

And the singer recalls many meetings with Balmain's creative director Olivier Rousteing, who designed the costumes for Beychella. Among the questions that came up in their collaboration: "How do we look united, but how do we have these different characters that stand out?"

It took months to script the show, Beyonce explains, noting that more than 200 people in total joined her onstage. "You want to make sure you see everything and I was adamant that we were well-rehearsed and that we knew the show front to back."

The performance bucked many festival conventions - to start, there were three sound stages, one for the band, one for the dancers and another for her creative staff. "It takes a huge team, it takes a village and I think we all worked to our limit," Beyonce says.

One scene shows Beyonce offering exacting notes on a run-through of the show. The energy isn't translating to footage of the performance, she tells her staff. "Until I see some of my notes applied, it doesn't make sense for me to make more."

But it's clear she is immensely proud of the end result.

"I know the importance of us feeling like we're a part of something, like we're being spoken to, like it's worth it," Beyonce tells us. "We all performed with all of our heart and we performed with love and connection, and we did it together."

(Except for the headline, this story has not been edited by NDTV staff and is published from a syndicated feed.)
Comments
beyoncenetflix homecoming