Silk Weavers in Varanasi Hang on By Thread, Plead For Rescue 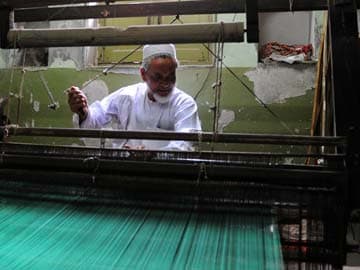 In this photograph taken on April 22, 2014 Indian weaver Sardar Haji Hafizullah works on a sari, the traditional dress worn by Indian women, at a handloom factory in Rajapura Varanasi.

Varanasi: Its saris have been a byword for sartorial elegance for centuries and even the Buddha was laid to rest veiled in a brocade of silk hand-woven in India's Varanasi, according to local legend.

But bosses and craftsmen say the Banarasi silk industry is hanging on by a thread and could be killed off within a generation by mass-produced garments and Chinese competition, unless India's next government steps in. (Elections: Full Coverage)

"I've been doing this job for more than 40 years now and my fathers and forefathers were doing it for around 250 years before me," said Sardar Hafizullah as he wove a green and gold sari on the ground floor of his home in Varanasi's Old City.

"But it seems that it is a dying art. It's only people like me keeping it alive," added the 65-year-old.

One of the oldest living cities in the world, Varanasi draws millions of visitors each year, whether Hindus who have come to bathe in the Ganges or tourists watching the world float by from the ghats on the side of the river.

But Varanasi is also famous for the quality of silk products crafted by mainly Muslim weavers in the city's backstreets, where saris and scarfs routinely take 15-20 days to make.

The finest creations fetch upwards of ten thousand dollars. Up until a decade ago, around 100,000 hand looms would crank away each day but the number has more than halved since then.

"When you talk about Banarasi silk we can trace the history back to the Lord Buddha whose body was draped in it.

The biggest problem for the weavers is simple: counterparts who work in factories can earn more than double the money as they are both paid, at least in part, on the basis of how much cloth they can stitch in a day.

"If you work on a handloom you get 200 rupees a day but it's around 500 if you work with an electric loom," said Amitabh.

"With a handloom you get one metre (of cloth) in a day and with machine-loom it's 10 metres. It's all about quantity."

It's a problem acknowledged by Sardar's sons who toil away alongside their father on the three hand looms in the family's cramped workshop.

While proud of his craft, Sardar's 32-year-old son Fayaz expects his three young sons will work in the mechanised sector when they come of age.

"I want to stay doing this for the rest of my life," he said as he took a break from operating the intricate system of levers and pulleys.

"What they (his children) do will be up to them of course but I am pretty sure they will go electric. The power sector is the future."

According to the Uttar Pradesh state government, the Varanasi hand-woven silk industry is worth around 80 million dollars each year to the local economy, including 20 million dollars in exports.

Although the exact number of powerlooms is not known, the last official figures in 2009 showed the number had increased in the wider Varanasi region from around 2,000 to 30,000 over the previous decade.

Adding to the crisis has been a rise in imports of cheap Chinese-made products and of Chinese yarn which has supplanted Indian-made fabric in much of the country.

"The Indian silk is gradually becoming more like an art form, for a selected 'niche' audience which can afford it while it is being replaced at the mass market level by the Chinese."

Shop owners say it would be a tragedy if Banarasi silk were allowed to die out but that market forces were against it.

Bharat Khemka who runs the Raj Gharana sari emporium in downtown Varanasi said one customer from France recently paid 300,000 rupees (nearly 5,000 dollars) for a hand-woven silk scarf but such extravagance is rare.

Khemka said factory-made products sometimes lost their shape and colour after only one wash but the huge price difference meant customers were willing to compromise on quality.

"The hand made ones are better but then they tend to cost 3,000 rupees when the factory-made ones are 300," he said.

But despite the higher price tag, shoppers say Banarasi silk sarees must not be allowed to become museum pieces.

"They are not just famous abroad but are part of our culture," said Savitri Srivastava who was buying several saris for her daughter's wedding.

"It is considered auspicious to give them as gifts for events such as weddings or festivals."

Given the grim prognosis, many in the industry are pinning their hopes on Narendra Modi, the man expected to win India's ongoing general election and who is standing in Varanasi.

Speaking in Varanasi last month, Mr Modi said he was determined to help the weavers.

"The lives of weavers here can be improved with steps like branding, technology upgrades and marketing," he said.

"If all these support mechanisms can be put in place I don't see any reason why our weavers can't compete with the Chinese."

Arvind Kejriwal, leader of the Aam Aadmi Party and who is standing against Mr Modi, has also made the weavers' plight a major plank of his campaign.

Promoted
Listen to the latest songs, only on JioSaavn.com
Amitabh said the industry needed "a complete revival package", before listing a string of complaints including electricity problems and multiple layers of bureaucracy and taxation.

"What we want is a level playing field," he added.