Priyanka Gandhi is my sister too, says AAP's Kumar Vishwas 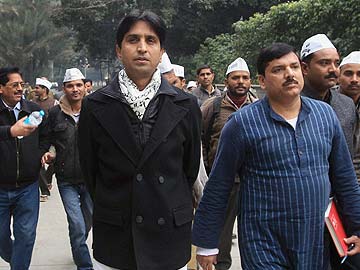 Amethi, Uttar Pradesh: Kumar Vishwas of the Aam Aadmi Party, who has declared he will run against Rahul Gandhi for parliament, said today that he hopes Mr Gandhi's younger sister, Priyanka, will assign her support wisely.

"She is my sister also... Now, it has to be seen whether she supports this brother (Vishwas), who had been hit by lathis for asking for justice in Damini and Gudia rape cases, or for the one (Rahul) who remained abroad," said Mr Vishwas, according to the Press Trust of India. (Watch: Challenge Rahul for a debate in Amethi, says Kumar Vishwas)

Ms Gandhi recently attended meetings about the strategy of her brother's campaign in his constituency of Amethi ,which has elected him since 2004. Though her participation spiked talk of whether she will run for office, Mr Gandhi today said, "As an active Congress worker she is helping me strengthen the party. But I don't think she will have any electoral role." (Read)

Promoted
Listen to the latest songs, only on JioSaavn.com
Mr Vishwas, a poet and professor, held a rally in Amethi on Sunday where he censured Mr Gandhi for visiting the homes of Dalit families. The Aam Aadmi Party leader described those house calls as an exercise in crass public relations. But 24 hours later, Mr Vishwas, with attendant cameras, visited one of those families. He said he was passing through the area when he heard the family was in trouble and decided to investigate further. (Why I picked Amethi, Kumar Vishwas tells NDTV)