No Murli Manohar Joshi in 'Below 75' Narendra Modi Cabinet 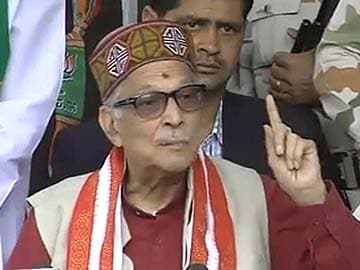 New Delhi: Narendra Modi's cabinet will not include Murli Manohar Joshi, who was a key minister in the last BJP government. Mr Joshi reportedly did not make it to the list because of Mr Modi's "below 75 years" rule.

Mr Joshi, 80, was the Human Resource Development Minister in the Atal Bihari Vajpayee government. Till Sunday, his name was being discussed among the probables for the new cabinet.

That the veteran leader would not be part of the new government, was confirmed when he was not among the visitors at Mr Modi's tea party at Gujarat Bhawan this morning. Mr Modi had invited only ministers to be.

"It is the PM's prerogative to decide his cabinet," said sources close to Mr Joshi.

The 75-year cut-off leaves many former ministers out, including LK Advani, who was Home Minister and Deputy Prime Minister during the Vajpayee regime, Shanta Kumar and BC Khanduri.

Sources say 75-plus leaders had been told not to expect major responsibilities.

Mr Advani was reportedly keen on being Lok Sabha Speaker but Sumitra Mahajan is tipped for that post.
Comments
Narendra Modi cabinetswearing in