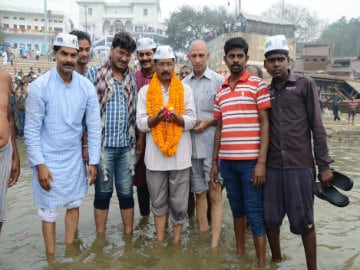 Aam Aadmi Party chief Arvind Kejriwal (C) poses for a photograph after taking a dip in Ganga river in Varanasi on March 25.

Varanasi: On a day when Narendra Modi tweeted an apology to "Ganga Maa" for not being able to perform special prayers on the riverbank in Varanasi, his political opponent, Arvind Kejriwal, blunted the sentiment. "Permission is needed for political events, not for prayers," Mr Kejriwal tweeted, accusing Mr Modi of misrepresenting the facts.

Mr Modi, the BJP's prime ministerial candidate, was meant to headline three functions today in Varanasi, from where he is contesting his first parliamentary election with Mr Kejriwal as his chief challenger. (Modi Apologises to 'Ganga Maa', questions Election Commission's 'Neutrality')

The Election Commission refused permission for Mr Modi's planned rally in the heart of the city, citing security concerns, but late last evening, it sanctioned Mr Modi's "Ganga Aarti" and a meeting with 150 private citizens at a local hotel.  The BJP said the clearances came through so late that it has cancelled those events. ('Timid Men Can Dwarf High Offices': Jaitley on Election Commission)

The party has unbuckled a huge confrontation with the Election Commission, with Mr Modi questioning its neutrality, and BJP leaders like Arun Jaitley announcing they will lead large protests in Varanasi.

Mr Modi will address a rally outside Varanasi's city limits and then drive to the party's headquarters, likely to double up as a retaliation to the Election Commission and a huge show of strength.

Promoted
Listen to the latest songs, only on JioSaavn.com
Hundreds of thousands of people watched last month as Mr Modi drove through the streets in an open truck to file his papers officially declaring him as the BJP's candidate in the city.

Varanasi votes on May 12, the final day of this election.  Ajay Rai is the Congress candidate.