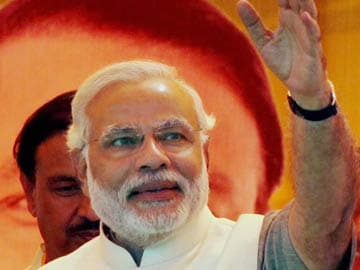 New Delhi: Narendra Modi today charged Sonia Gandhi with "blatant communalism" over her meeting with top Muslim religious leaders where she allegedly asked them to ensure that the minority vote is not divided. Mr Modi, who is the BJP's prime ministerial candidate, said at a rally in Uttar Pradesh that the Election Commission should take action against Mrs Gandhi. (Elections: full coverage)

The Election Commission said earlier today that if a complaint is filed, it would examine the issue and "further action would be taken." Late this evening, the BJP filed a formal objection stating that Mrs Gandhi's meeting was aimed at polarising the elections. (Row over Sonia Gandhi's reported comments to Muslim leaders reaches Election Commission)

Mr Modi tweeted, "Now that people have seen through Congress' empty slogans & 'commitment' towards secularism, they have turned to open communalism. (sic)"

On Tuesday, Mrs Gandhi met with a group of influential Muslim leaders headed by Syed Ahmed Bukhari, the Shahi Imam of one of India's most important mosques, the Jama Majid. She reportedly asked the group to ensure that the Muslim vote in India is not divided.

The BJP has pointed out that asking for votes on the basis of religion violates election rules. (NDTV's Opinion Poll)

Promoted
Listen to the latest songs, only on JioSaavn.com
Congress leader Anand Sharma, however, said that politicians are free to meet religious leaders and that there was nothing questionable about Mrs Gandhi's meeting.

"We are not in the habit or in the game of polarising the elections," Mrs Gandhi told reporters earlier. (Elections schedule)