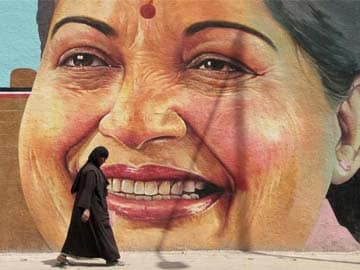 A woman walks past a portrait of J Jayalalithaa, chief minister of Tamil Nadu, in Chennai March 13, 2012.

Chennai: For the BJP, March 29, 1999 is a date it would not like to forget easily. A tea-party organized by Janata Party president Subramanian Swamy in the capital's Ashoka Hotel had on its guest-list Congress president Sonia Gandhi and J Jayalalithaa, whose AIADMK was a constituent of the NDA government at the Centre. (Full coverage: Elections)

Jayalalithaa flew from Chennai to attend the function, and after spending nearly 10 minutes with the Congress leader, told the waiting journalists that a "political earthquake'" had just taken place.

The AIADMK withdrew its support to the Atal Bihari Vajpayee government soon after, and fresh elections were called for. Even though the BJP-led alliance was voted back to power in the Lok Sabha polls held later that year, the BJP had learnt a bitter lesson.

Ms Jayalalithaa, 66, remains a politician the BJP would be loathe to do business with - a perception that is shared by the Congress.

Ask CPM general secretary Prakash Karat. He too got a taste of Ms Jayalalthaa's mercurial ways when she first extended her backing to the idea of floating an alternative front in time for the Lok Sabha polls, only to withdraw it in less than a month later.

As the country gears up to face another round of national elections, the AIADMK chief, who is also the chief minister of Tamil Nadu, is going solo in Tamil Nadu. She has gone public with her ambition to become the country's prime minister.

A maverick leader who is dubbed by her adversaries as being imperious, Ms Jayalalithaa, called Amma by her followers, is also strong-willed, tenacious and gritty. She is also suave, and can charm her interlocutors with her command over several languages, including English, Tamil, Hindi, Kannada, Telugu and Malayalam - a rarity in Tamil politics.

Ms Jayalalithaa was born on February 24, 1948 at Melukote in Mandya district. Her mother Sandhya shifted to Bangalore after her husband's untimely death, and admitted her daughter in Bishop Garden Girls' High School. They later relocated to Chennai, where Sandhya enrolled Jayalalithaa at Presentation Convention Church Park. She finished her matriculation in 1964, and won a scholarship from the government of India for pursuing higher studies, but her mother persuaded her to taking up acting as a profession, at a young age of 15.

As an actor, Ms Jayalalithaa soon made a name for herself. She performed the lead role in over 140 films in Tamil, Telugu and Kannada. A trained classical dancer, she even acted in a Hindi film, Izzat, where she paired up with Dharmendra.

In the Tamil film industry, she matched her acting talents with actors such as Shivaji Ganesan and MG Ramachandran, or MGR,  who would later mentor her into the world of politics. She appeared in 24 films with him.

Ms Jayalalithaa joined the AIADMK in 1982. Starting from 1977, MGR won three consecutive terms in the state assembly, and he died in office in 1987. His death gave way to a bitter power struggle in the AIADMK. The party split a year later, with one faction rallying behind his widow Janaki, the other aligning itself with Ms Jayalalithaa.

Ms Jayalalithaa eventually won the tussle to gain control of AIADMK. In 1991, she was elected as the chief minister for the first time.

Promoted
Listen to the latest songs, only on JioSaavn.com
Her first stint as the chief minister of Tamil Nadu was marred with charges of corruption. The accusations would come back to haunt her later. In 2001, she was prevented by the courts from contesting the assembly polls after being held guilty of obtaining property belonging to TANSI, a state-run agency. In March, 2002, she was absolved of some of the charges by the Madras High Court. It cleared the way for her rehabilitation. She was re-elected as the chief minister after winning a by-election from Andipatti.

She ceded power to the DMK-Congress alliance in 2006, but stormed back five years later as the leader of a 13-party alliance.