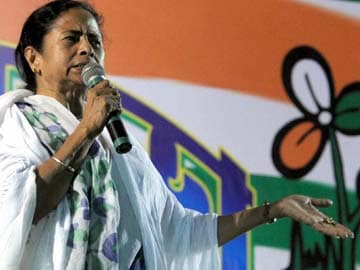 Kolkata: In the last lap of the general elections, Mamata Banerjee's charges against Narendra Modi, the BJP's prime ministerial candidate, are getting more graphic. She has now compared him to Hanuman with his tail on fire and in another speech asked, "Is he a donkey?"

"He has put on a tail, he's flying around burning Lankas everywhere," Ms Banerjee, who is the chief minister of West Bengal, said at a rally yesterday. The reference was to the epic Ramayana, in which the monkey god Hanuman set antagonist Ravan's kingdom on fire with his tail.

Ms Banerjee has earlier accused Mr Modi of inciting violence in Assam and demanded his arrest alleging that he has attempted to instigate community-based violence in West Bengal. (Mamata Banerjee Accuses Narendra Modi of Instigating Violence in Assam)

A day ago she said Mr Modi "should be put in jail with a rope tied around him."

Modi bashing has dominated Mamata rallies ever since the BJP leader earned her ire a few weeks ago for insinuating that a dubious businessman had bought her painting for 1.8 crores. She has since also called him a "paper tiger" and yesterday, while attacking him for "dubbing all who came from Bangladesh as infiltrators," asked, "Is he a donkey?" (Narendra Modi Hits Back At Mamata Over 'Paper Tiger' Jibe)

Last week Mr Modi further angered her by saying that all illegal immigrants from Bangladesh, bordering West Bengal, will be sent back if his BJP comes to power at the Centre.

Her ire was yesterday amped up by several degrees no doubt by Mr Modi's presence in West Bengal, where he mocked "Didi" at rally after rally for being "angry with me."

Promoted
Listen to the latest songs, only on JioSaavn.com
In Kolkata, he reminded Ms Banerjee, "You have raised the issue of Bangladeshi infiltrators in Parliament in 2005. What you have raised in 2005, your brother is saying today. But you are talking about sending me to jail...We did not expect this change. To save your chair, will you put Bengal's future in the dark?"

He also offered to "go to jail and first learn Bengali," much to the delight of cheering crowds. To chants of "Modi, Modi" he accused Ms Banerjee of not wanting the good of Bengal.