India's spend on elections could challenge US record: report 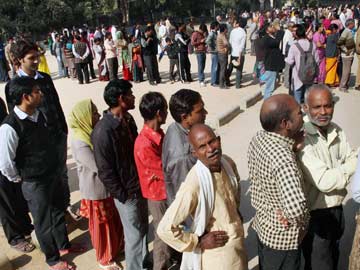 File photo: People stand in queue in Delhi waiting to cast their votes

Indian politicians are expected to spend around $5 billion or Rs 30,500 crore (at 1 dollar=61 rupees) on campaigning for elections next month - a sum second only to the most expensive US presidential campaign of all time.

The estimate has been offered by the Centre for Media Studies, which tracks spending.

That is triple the expenditure the centre said was spent on electioneering in the last national poll in 2009.

India's projected campaign spending is only rivalled by the $7 billion (Rs 42,700 crore) spent by candidates, parties and support groups in the 2012 U.S. presidential race, the world's most expensive, according to data provided by the U.S. election commission.

The dates for the month-long election starting on April 7 were announced last week, with polls staggered in nine stages.

Chief  Election Commissioner V.S. Sampath said on Wednesday he was worried about "money power" - heavy spending and the use of illegal funds to influence the outcome.
The Centre for Media Studies' spending projections are based on analyses of rising costs in local and state elections in the past five years. It also surveys voters on prevalence of bribes.

The campaign spending for this election could give a boost to the economy, which has been heading for its longest slump since the 1980s. Economists have forecast a second year of growth below 5 per cent in the financial year ending this month.

"This election spending largesse will help to boost Indian consumption expenditure over the second quarter of 2014, but this will be a temporary spike," said Rajiv Biswas, the Asia-Pacific chief economist at IHS Global Insight.

Spending on previous Indian elections have benefited a wide range of businesses, from media groups and advertisers that rake in campaign-ad revenues to consumer-based firms that capitalise indirectly on the overall jump in spending.

India's advertising industry expects to see an $800 million or Rs 4,900 crore injection during the election season, according to an outlook by the country's largest local agency, Madison Media.

However, much of India's campaign spend will remain in its thriving black economy.

Rules allow candidates to spend Rs 70 lakh on campaigns for a parliament seat but the real cost of winning is about 10 times that, thanks to spending on rallies, fuel and media campaigns that often include payments for coverage.

Promoted
Listen to the latest songs, only on JioSaavn.com
In the last three years, election authorities seized from politicians a total of about $32.65 million or Rs 200 crore in the form of concealed cash, some if it stashed in helicopters, milk trucks and even funeral vans, a former election commissioner said.

"Instead Of Cursing Congress, PM Should...": Mallikarjun Kharge's Retort