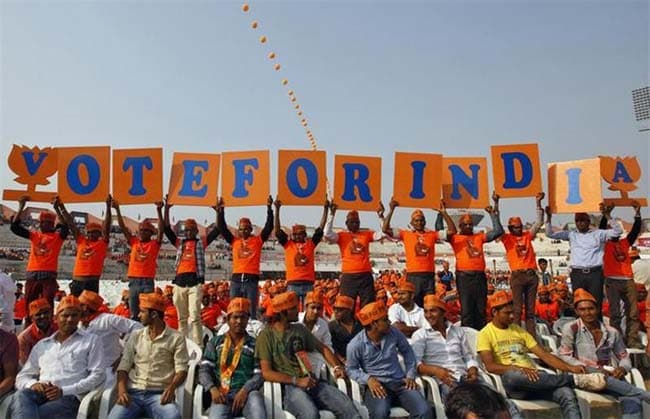 New Delhi: India is on course for a record turnout in its general election as a young electorate and women engage with politics more than ever before.

Opinion polls say the BJP, under its prime ministerial candidate Narendra Modi, will win the maximum seats.  The Congress-led coalition, after 10 years in power,  is battling public fury over a slowing economy, high inflation and a spate of corruption scandals.

But regional parties will also play a key role, with  opinion polls  differing on whether Mr Modi's alliance will achieve a majority or fall short of winning 272 of the 543 seats in the Lok Sabha.

"We have to be cautious. It's very hard to tell that increased turnout is good for the incumbent or bad for the incumbent," said Vivek Dehejia, an economics professor at Canada-based Carleton University. (India Votes 2014: Full Coverage)

"It seems to represent people coming out to vote out the Congress-led government (but) every vote taken away from Congress does not necessarily mean it's for the BJP."

In the first eight phases of the 10-phase election, 66.2 percent of registered voters exercised their right to vote, provisional data from the election commission showed. (India Votes 2014: Schedule | Candidates)

That compares with the previous best turnout of 64 percent during the 1984-85 parliamentary election, when Congress leader Rajiv Gandhi rode a sympathy wave to come to power after the assassination of his mother, then prime minister Indira Gandhi.

The record is likely to be broken this year, said Sanjay Kumar, director at the respected polling group CSDS, which expects a turnout of 65 percent.

"We are looking for a very good turnout, it should be much better than before," said Akshay Rout, head of the election commission's voter education programme. "It is likely to be one of the highest."

The rising turnout is largely attributable to increased participation of younger and first-time voters, as well as women. These demographic groups have been targeted by the Election Commission with an outreach campaign since the last general election in 2009.

Among the first-time voters is 33-year-old Mriganka Dadwal, who feels "ashamed" to have never voted in elections after she turned 18, the minimum age required to cast vote in India.

"I am proud of the fact that I realised and voted this time ... I am one of those who was very angry that why this kind of government is there," said Dadwal, who is the founder of an activist group promoting women's empowerment.

The country has added over 23 million people or 2.3 crore in the 18-19 age group to voter rolls this time. This group now constitutes about 3 percent of total voters, against 0.75 percent in 2009.

Promoted
Listen to the latest songs, only on JioSaavn.com
Of the 28 states and union territories that have gone to polls, 26 have recorded a higher turnout compared to the last parliamentary election, election commission data showed.