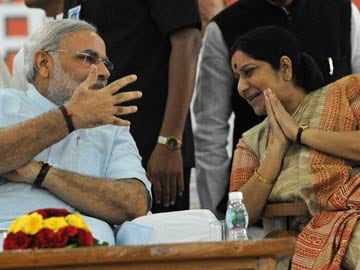 New Delhi: The Bharatiya Janata Party's landslide election victory today will be followed by the Prime Minister submitting his resignation tomorrow to the President of India. (5 Steps to a New Government)

As the BJP plans mega-celebrations, its top rung is also trying to shape the government that will be headed by Narendra Modi,  who has spent the last 13 years as chief minister of Gujarat. (After Mega-Win, Modi Flashes Victory Sign)

The following is a list of some of the men and women who are likely to emerge as key players in the new Modi administration:

Amit Shah: Mr Modi's most trusted aide, Mr Shah is tipped to become his boss's cabinet enforcer with a possible post in the Prime Minister's Office.

Their association dates back to the 1980s when they were both part of Rashtriya Swayamsevak Sangh (RSS), the volunteer Hindu nationalist organisation that is seen as the ideological fountainhead of the BJP. (Vadra part of corruption debate, not personal attack: Amit Shah)

Mr Shah is highly regarded by Mr Modi as a political strategist and was in charge of the BJP's campaign in the electorally crucial state of Uttar Pradesh, which the party has swept.

However, Mr Shah is tainted by allegations from his earlier tenure as Home Minister in Gujarat, including claims that he authorised extra-judicial killings. He denies all charges.

Arun Jaitley: Widely tipped to become the Finance Minister, Mr Jaitley was one of India's most succesful lawyers before he became leader of the opposition in, the Rajya Sabha. He has lost his election today for Amritsar in Punjab to Captain Amarinder Singh of the Congress.

Mr Jaitley, 61, is  one of the most articulate and liberal voices of the BJP and is often the party's choice to address the media and defend Mr Modi's sometimes controversial track record. (Jaitley Praises Modi's Energy, Modi Praises 'Power of Bharat Mata')

Sushma Swaraj: She is the current leader of the opposition in the Lok Sabha and the BJP's most senior woman leader. Now aged 62, she became India's youngest cabinet minister in 1977 after the end of Indira Gandhi's emergency government. (Sushma Swaraj Wins, Circumspect About Joining Modi's Government)

A fiery orator,  Ms Swaraj is seen as a member of a small club of heavyweights within the BJP that were not originally in favour of  Mr Modi's elevation as the party's prime ministerial candidate.

She has reportedly conveyed that she will not join the  government unless she gets one of the four big ministries - Foreign Affairs, Home, Finance and Defence. (Sushma Wants a Top-4 Ministry: BJP Sources)

Promoted
Listen to the latest songs, only on JioSaavn.com
Nitin Gadkari: The former president of the BJP told NDTV today that  it is up to the party to decide whether he will join Mr Modi's cabinet. He denied reports that current BJP chief Rajnath Singh could join the government, allowing Mr Gadkari to return as party boss.

Mr Gadkari is known for his close relationship with the BJP's powerful ideological mentor, the Rashtriya Swayamswak Sangh. He has won the Nagpur seat today.  In January last year, he was on the cusp of getting an unprecedented second consecutive term as BJP president when allegations of corruption forced him to resign.

Lalu Yadav Did Nothing For Women But Make Wife Successor: Nitish Kumar