BJP cancels membership of yet another new recruit Sabir Ali 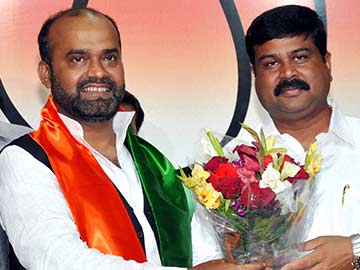 New Delhi: For the second time in less than a week, the BJP has cancelled the membership of a new recruit just hours after entry.

Sabir Ali, controversial leader from Bihar, has been dropped from the party - he was welcomed yesterday. Alleging that he is a sympathizer of Yasin Bhatkal, the alleged mastermind of the terror group Indian Mujahideen, many BJP leaders had opposed his induction.  (BJP leader tweets against new recruit, asks is Dawood next)

Party president Rajnath Singh laid down some house rules for them today. "Rajnathji has suggested that BJP members must raise internal issues only in party forums and not go public with them," spokesperson Ravi Shankar Prasad said.

Six days ago, the BJP rescinded the new membership of Sri Ram Sene leader Pramod Muthalik, who was among the attackers of a group of young women in a Mangalore pub in 2009. (Controversial Pramod Muthalik: in and out of BJP in five hours)

Mr Ali's induction into the BJP was derided most by Mukhtar Abbas Naqvi who asked on twitter last night if the party would next recruit underworld don Dawood Ibrahim.

Mr Ali today denied any terror links. "If the allegations against me are found true even distantly, I will quit politics forever," he told reporters.

Promoted
Listen to the latest songs, only on JioSaavn.com
Mr Ali now has the distinction of exiting two parties in a fortnight. He joined the BJP after being sacked from the Janata Dal (United) in Bihar after he publicly praised the BJP's prime ministerial candidate, Narendra Modi - payback for not being re-nominated by the JD(U) to the Rajya Sabha.

The BJP faced huge pushback a few weeks ago from Sushma Swaraj who lobbied publicly and unsuccessfully against its move to induct B Sriramulu, linked to illegal mining and corruption scandals in Karnataka.