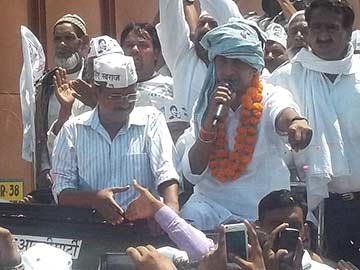 AAP convener Arvind Kejriwal during an election roadshow in support of party candidate Kumar Vishwas at Jagdishpur in Amethi on Monday.

Varanasi: Pitching his 'aam-aadmi' credentials, Arvind Kejriwal today hit out at Narendra Modi and Rahul Gandhi for their "helicopter democracy" while projecting himself as an "honest" alternative.

The AAP leader, who filed his nomination papers for the Lok Sabha polls from Varanasi today, highlighted the "massive" spending in the advertisement campaigns for BJP's Prime Ministerial candidate and Congress Vice President and asked people to decide what kind of democracy they want. (India Votes 2014: full coverage)

"Somebody was saying that Modi is spending Rs 5000 crore in advertisements. Gandhi is also spending a lot of money. You watch TV, read newspapers, see billboards, they are there and everywhere. If he (Modi) is elected to power, he will make at least Rs 5 lakh crore.

"I am a fakir. I have no money. I will run a campaign on your money. You decide what you want," he told a road show. (I have Rs. 500 in my pocket and an old jeep: Arvind Kejriwal in Varanasi)

Accusing Mr Gandhi of cheating the people of Amethi, Mr Kejriwal said people told him that they kept electing the "family" member in the hope that their constituency will be developed.

"Nothing happened and they feel cheated," he said.

"They (people) don't get to see him. They see only his helicopter flying in the sky. I hope it does not happen in Varanasi that you are pointed to a flying chopper and told that your leader (Modi) is there....You decide if you want helicopter democracy or somebody who goes to villages and mohallas" he said.

Promoted
Listen to the latest songs, only on JioSaavn.com
Mr Kejriwal is contesting against Mr Modi in the high profile Uttar Pradesh constituency.