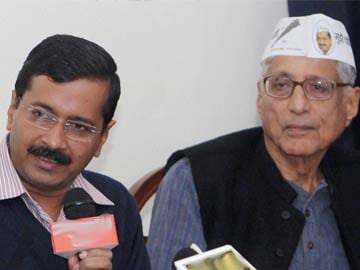 New Delhi: Arvind Kejriwal's Aam Aadmi Party or AAP is reportedly trying to persuade Rajmohan Gandhi, grandson of Mahatma Gandhi, to challenge Narendra Modi in the national elections due by May.

Mr Modi is the BJP's prime ministerial candidate and his party has not yet decided where to field him from, though BJP president Rajnath Singh asserted recently that he would contest the Lok Sabha elections. (Yes Mr Kejriwal, Modi will fight Lok Sabha battle: Rajnath Singh)

Rookie party AAP is first off the block already having released a first list of 25 candidates for the general elections, among them that of Kumar Vishwas to take on Congress vice president Rahul Gandhi. (Read: AAP's first Lok Sabha list out)

When contacted by NDTV, Mr Bajaj refused to confirm reports of his candidature. "Please check with AAP. I don't want to say anything at this stage," he said. Mr Bajaj is Managing Director of Bajaj Auto.

He had earlier this week praised Mr Kejriwal saying "If I may say so I'm a fan of Arvind Kejriwal. And I hope he wouldn't mind my saying this that I have had the occasion to meet him on more than once and I resonate very strongly with his thoughts and ideologies." (Read: Arvind Kejriwal has a 'fan' in Rajiv Bajaj)

There is a buzz that AAP could field Adarsh Shastri from Lucknow, for long seen as a BJP stronghold; it was former Prime Minister Atal Bihari Vajpayee's constituency. The son of senior Congress leader Anil Shastri, 40-year-old Adarsh quit a job with technology giant Apple to join AAP in December last year.

Promoted
Listen to the latest songs, only on JioSaavn.com
Rabbi Shergil could get the AAP ticket from Amritsar, where he would be pitted against cricketer-turned-politician Navjot Singh Sidhu of the BJP.

Former Delhi minister Rakhi Birla, a 26-year-old former journalist could be be nominated from New Delhi, sources said. Congress spokesman and communications department head Ajay Maken is the MP from the prestigious seat.