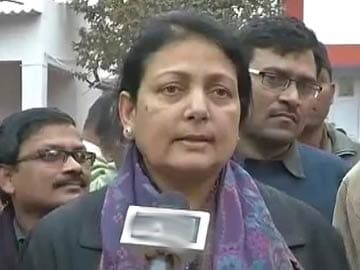 The party declared five candidates in Bihar, seven in Jharkhand, one in Madhya Pradesh and two each in Jammu and Kashmir, Kerala and Maharashtra.

With this list, the total number of candidates declared by AAP so far has reached 287.

Ms Amanullah, Social Welfare Minister in Nitish Kumar government in Bihar and a prominent Muslim leader, had resigned from the cabinet and the JD(U) in February.

Ms Amanullah is the wife of senior bureaucrat Afzal Amanullah.

She is the daughter of former diplomat Syed Shahabuddin, a prominent leader of 'Babri Masjid Action committee'.

In the latest list, AAP has declared candidates from Patna Sahib, Siwan, Vaishali, Jhanhjarpur and Sitamarhi in Bihar, while from Khunti, Hazaribagh, Chatra, Palamau, Kodarma, Giridih, and Ranchi in Jharkhand.

Candidates' names have also been announced from Jammu and Anantnag in Jammu and Kashmir, Vadakara and Ponnani in Kerala, Latur and Kolahpur in Maharashtra and Tikamgarh in Madhya Pradesh.